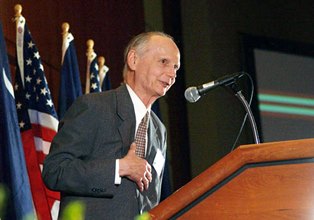 Former Gov. Dick Riley said civics education must become a higher priority, calling it critical for the country’s future that teenagers gain a basic knowledge of American civics. The citizenship test is a practical way of stressing its importance, said Riley, who served as President Bill Clinton’s U.S. education secretary after his second term ended in 1987.

“This is not a partisan issue. It is an American issue,” Riley said.

He helped launch the “South Carolina Civics Education Initiative” on Wednesday, the 227th anniversary of the signing of the U.S. Constitution. Other co-chairmen of the effort include former Democratic Gov. Jim Hodges (1999-2003) and former Gov. James Edwards, who in 1975 took office as the state’s first Republican governor since Reconstruction.

They want the Legislature to pass a bill letting high school students boost their final grade point average by passing the test. The details have yet to be worked out, and the backers don’t yet have a legislative sponsor to introduce the measure for the session that starts in January.

But the idea is to encourage students to learn the basics of America’s founding and how government works so they become engaged, voting citizens.

As currently envisioned, the proposal would not require South Carolina students to take the test, but would give them incentives to do so and allow them to take it as many times as they want. A passing score on the 100-question test would be 60 or higher, said Shell Suber, a spokesman for the initiative.

Immigrants take the test verbally from U.S. Citizenship and Immigration Services officers. Applicants must answer at least six of 10 questions correctly, and the test stops as soon as the sixth correct answer is given, according to the Department of Homeland Security’s website.

Suber said the cost of having South Carolina high school students answer all 100 questions from the federal testing list should be minimal, since the questions already exist and the federal government provides study materials online. Each school could determine how to make the test available to its students, he said.

While the overwhelming majority of immigrants pass the test on their first try, “unfortunately, American students aren’t prepared for the answers,” Suber said.

He pointed to a survey released Wednesday that found 1 in 3 adults can’t name any of the three branches of government. Just over a third correctly named all three, according to the national survey by The Annenberg Public Policy Center of the University of Pennsylvania.

South Carolina’s initiative is part of a national effort by the Arizona-based Joe Foss Institute.

Suber said six other states launched similar initiatives Wednesday: Arizona, Louisiana, Missouri, Oklahoma, South Dakota and Utah. The goal is for every state to pass the proposal by 2017, when the Constitution turns 230 years old.

What to Learn in Obama’s ‘Teachable’ Race Moment?

HBCUs: An Educational System at the Crossroads