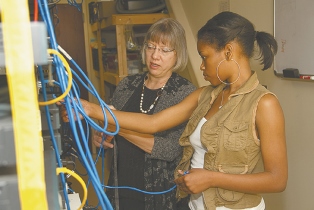 Pamela Silvers, left, primary investigator and chair of business computer technologies, said women often “don’t picture themselves as being in a technology or engineering profession.”

Women at North Carolina community colleges earned 28 percent of the associate degrees in computer and information sciences, and 10 percent of the degrees in engineering and related fields in 2011, according to the Department of Education’s IPEDS data.

With an NSF grant of nearly $200,000, which the college received in the fall of 2012, A-B Tech was able to bring up the number of women in those seven targeted STEM programs from 39 to 75, nearly doubling their numbers. The recruiting efforts resulted in an overall enrollment increase among male and female students alike.

“I learned that women do not see themselves in STEM professions,” said Pamela Silvers, primary investigator and chair of business computer technologies. “They don’t picture themselves as being in a technology or engineering profession. So we knew that we needed to create an outreach campaign.”

The first problem, Silvers said, was one of perception. While many women were willing to go into nursing with the goal of helping others, few realized that a profession such as IT would feature the same amount, if not more, customer interaction and collaboration.

To counteract these perceptions, Silvers and her team decided to rethink their existing recruiting and marketing materials. Whereas students shown in previous marketing material were only 10 percent female, Silvers said they sought to equalize it and show more women.

“We came up with a theme ‘picture yourself,’” Silvers said.

Silvers said they created marketing sheets featuring images of successful women in STEM, such as Dr. Sally Ride, the first female astronaut to travel to space. But for students primarily interested in obtaining an associate’s degree or certificate at a community college, Ride’s academic trajectory, which took her literally into the stratosphere, Silvers said, may not be relatable.

So the campaign also featured local female success stories who were able to get good jobs through an associate’s degree.

Next, Silvers said they rethought where they were extending their recruiting efforts. For example, college career fairs at middle schools—albeit good for overall awareness—were not going to result in additional students at A-B Tech the following year.

Instead, Silvers and her team targeted students in ASPIRE, GED students, JobLink and students still in high school.

The team also focused their efforts on retention.

“Once you get them in to college, the next issue is you want to make sure you keep them in the seats and then you get them to graduate,” Silvers said. So she and her team incorporated problem-based learning into their teaching methodology.

“It’s a way for (students) to get in and use their hands and use their brains, and really develop their soft skills,” said James Sullivan, another primary investigator and chair of civil engineering and geomatics technology.

“Our overall retention went up,” Silvers said, adding that their methodology proved to be effective for men and women alike.