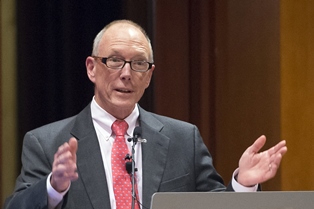 U.S. Under Secretary of Education Ted Mitchell said designing the rating system is “an important step in improving transparency, accountability, and equity in higher education.”

The United States Department of Education today unveiled a “framework” for its long-awaited college rating system — and it could factor in things such as how many Pell grant recipients attend a school and how much federal aid recipients from different income brackets pay to attend a given institution on average.

While U.S. Under Secretary of Education Ted Mitchell said designing the rating system is “an important step in improving transparency, accountability, and equity in higher education,” several higher education leaders who reviewed the framework late Thursday said that it is too sparse on details to make any substantive judgments about how useful or effective the end product will be.

And one higher education leader said a “glaring omission” from the framework was any mention of race and ethnicity.

“While they have been talking about attention to equity as a goal of the framework, that’s no longer mentioned in the goals,” said Michelle Asha Cooper, president of the Institute for Higher Education Policy.

“And when we look at the data, we do see data and measures that look at income, first-generation status, Pell grant recipient, but race and ethnicity are no longer included,” Cooper said.

Cooper said that there is no reason not to track race and ethnicity — long included in many education data systems to examine outcomes for different racial and ethnic groups — particularly in light of recent national events, such as the police killings of unarmed Black citizens that have sparked massive protests with the phrase “Black Lives Matter” as their mantra.

“We have always looked at race and ethnicity,” Cooper said. “The fact that we are omitting that variable, that’s a real red flag for me.”

Asked if income was a sufficient proxy to examine matters of racial and ethnic equity, Cooper said she disagreed.

“Income is a real issue,” Cooper conceded. “But based on events that have happened across this country in the last month or two, we can see that race is still an important factor in the lives of people every day.”

Since race and ethnicity are important indicators of the “realities of a lot of people’s outcomes,” Cooper said, “how colleges and universities respond to that tells us a lot about their mission to serve all students and their notions of equity.”

“I feel it is an important detail to keep in the forefront,” Cooper said.

Terry Hartle, Senior Vice President in the Division of Government and Public Affairs for the American Council on Education (ACE) said while Education Department officials clearly put a lot of effort into the ratings system, the description released Friday doesn’t quite meet his idea of being a true framework.

“This is really a status report and not a conceptual framework,” Hartle told Diverse. “It reflects a lot of hard work on a really hard topic and it provides a thoughtful discussion of the issues. But it does not provide a concrete plan for proceeding.

“And the lack of details about how such a system will be constructed, what the formula will look like, and how different elements in the formula will be weighted, means that no college can have any idea about what this means for them,” Hartle said.

“I want to be clear,” Hartle continued. “This is a thoughtful paper that seeks comment. The bad news is that it only underscores the fear of many schools that (the ratings system) lacks a clear framework, the data and time needed to do this well.”

According to an education department news release, the first version of the rating system will include four-year and two-year degree-granting institutions.

It will rely on three “broad categories” to indicate how well an institution is doing: high-performing, low-performing, and “those in the middle.”

Though higher education leaders have called for the Education Department to make sure that institutions are judged and grouped with like institutions, the only thing the department is clear about in this regard is that it will judge two-year and four-year institutions separately.

“The Department is considering accounting for differences in institutional characteristics such as degree and program mix and selectivity and are currently conducting data analyses to determine what, if any, more granular groupings could be used,” the department said in a statement.

Similarly, the department says it is “interested in exploring” how to recognize performance improvement over time but offered no concrete steps on how it would do so.

The ratings system will rely mostly on federal data, including from the Integrated Postsecondary Education Data System, or IPEDS, and the National Student Loan Data System according to the Department. It will also use “earnings information.”

In terms of metrics, the department says that it is “exploring and seeking comment to weigh the pros and cons of possible metrics that could be used to narrow down the measures that will actually be used in the ratings system.”

So far, those metrics include:

• The percentage of students receiving Pell grants. This, the department says, is a “simple, clear measure of access for low-income students.”

• The Expected Family Contribution, or EFC, gap. “The Department is considering this metric as another way to gauge the degree to which institutions enroll students from lower-income family backgrounds,” the department said in its statement. “The EFC of students is generally considered to be a strong measure of whether a student comes from a low socio-economic status or high socio-economic status background.”

• Family Income Quintiles. This will be “another possible measure” of an institution’s enrollment of low- to moderate-income students. “Like percentage of students receiving Pell, this would be simple and easy for consumers to understand,” the department states.

• First-Generation College Status. “The percentage of enrolled students who did not have a parent who attended college would reflect the extent to which institutions serve underrepresented populations in ways not measured by metrics based on EFC or family income,” the department states.

The department says it also is considering:

• Average Net Price. “This measure ― the cost of attendance after accounting for all federal, state, and institutional grant aid ― is one we’re considering using to determine affordability,” the department says. “It comes closer to approximating the amount that students actually pay to attend an institution than published tuition and fees.”

• Net Price by Quintile. “This measure offers a more accurate measure of the actual price paid by students of various family income backgrounds than average net price but is only available for those students who are federal student aid recipients,” the department states.

• Completion Rates. With this metric, the department states, it would aim to capture “how well institutions support students in persisting and achieving their educational goals.” Though IPEDS currently only captures first-time, full-time students, the department says it will release graduation rates for “a broader cohort of students” — including part-time and transfer students — starting in 2017.

• Transfer Rates. “Since, for many students, a two-year college is a step toward completion of a bachelor’s degree,” the department says it is “exploring the viability of measuring transfer rates as a positive outcome for students.”

In addition to earnings data, the Department says it also may look at graduate school attendance and the percentage of students repaying their loans to assess how well a college or university is performing.

“As a nation, we have to make college more accessible and affordable and ensure that all students graduate with a quality education of real value,” Duncan said in a written statement. “Our students deserve to know, before they enroll, that the schools they’ve chosen will deliver this value.”

Barmak Nassirian, Director of Federal Relations and Policy Analysis at the American Association of State Colleges and Universities, said he appreciates “the hard work and sincerity with which the department has engaged in this effort.”

“But to be candid, there are a number of fundamental assumptions they make about student enrollment patterns and the extent to which the students they care about the most — low-income kids and low-income students — exercise any kind of discretionary choices,” Nassirian said. “The model they seem to be contemplating is a traditional age young student sitting at home looking at a range of options from California to the East Coast, and then, ‘Here we are we can help them make a better decision.’

“Yes, there are students like that but they are by no means the majority of students,” Nassirian said. “For the vast majority, it’s the local community college or four-year institution within 20 miles of where they live.

“For those students, this whole schema doesn’t make a whole lot of difference,” he said.

Hartle said if he had his druthers, he would have the Education Department take comments from institutions and others who will write in response to the department’s request for feedback, then produce a “genuine conceptual framework that will very clearly lay out the formula that they will use, the different variables they incorporate into that formula and the weights they attached to them and publish that for peer review.”

“Tell people exactly where they’re going to go and ask them what they think,” Hartle said.

“The second thing I would ask them to do is to do this right given the stakes involved for these institutions,” Hartle said.

Education Department officials have previously indicated plans to tie federal aid to an institution’s performance under the ratings system.

“Right now, it’s a project driven by a timeframe set by the President,” Hartle said. “I would be much more comfortable if it was driven by the desire to get it absolutely right.”

The department says it still considering “how best to present the information about access, affordability, and outcomes in a way that increases transparency and meaningfully informs student choice.”