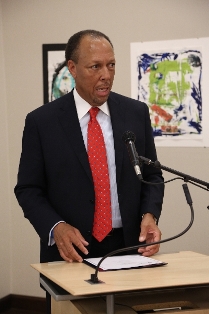 Jackson State Provost and Senior Vice President James Renick says “relevancy is the key” to an even more successful future for the Executive PH.D. program.

“Forward-thinking and visionary individuals who desire to be catalysts of change”—That’s the official description of the 167 graduates of the Executive Ph.D. program in urban higher education at Jackson State University, all of whom were honored this month at the 10th anniversary celebration of the program.

Beyond the glowing words and glossy photos are the graduates themselves—educators, administrators, corporate CEOs, government officials including two mayors, and consultants working with nonprofits and youth projects.

The intensive program is known for its rigor, because it is completed in two years, inclusive of the dissertation. It has attracted a diverse group of mainly mid-career professionals who have previously earned master’s degrees and who work in a cohort of about 20 students.

After 10 strong years, Jackson State Provost and Senior Vice President James Renick says “relevancy is the key” to an even more successful future.

“We’re going to continue to assess the relevancy of the program and make sure the currency is the best possible,” Renick explains. “Because it was successful in the first decade doesn’t guarantee that it will be as successful in the next decade. We need to be forward-thinking, bringing in new ideas.” He added that greater use of the university’s “robust infrastructure” in online education will be critical.

The anniversary celebration provided an opportunity for the university to recognize not only the graduates but the prime movers of the program. The awardees included Executive Director Dr. Walter Brown, who attributes the program’s success to “the high caliber of students we have been fortunate to recruit locally and across the country.” Brown told Diverse that his major plans include increasing diversity and recruiting more international students. Those goals are in line with Jackson State’s overall endeavors to enhance diversity and expand its international presence.

Other awardees were Dr. Joseph Martin Stevenson, the visionary who defied the odds and founded the program at JSU, Mississippi’s largest historically Black university, and is currently chief academic officer for the Chicago School of Professional Psychology; Dr. Neari Warner, a faculty member and former acting president and provost of Grambling State University; Dr. Mary M. White, interim vice president of institutional advancement at JSU; and Dr. Fran Bridges, assistant director of the EPhD program and the Jake Ayers Institute for Research in Urban Higher Education.

“I can attest to the importance that the Jackson State University Executive Pd.D. is playing in preparing a new generation of higher education leaders,” Cox told the gathering. “Your graduates are and will continue to have a powerful influence on the development and management of every aspect of the higher education experience. They have had a profound influence on the higher education classroom, on student services, on institutional research, on administration and finance and they have made a difference in the institutions and other organizations they have touched.”

JSU’s EPhD is modeled after the University of Pennsylvania’s cohort-based executive Ed.D. At JSU, the research focuses on subjects such as retention of African-American students, HBCU development and fundraising, STEM curricula and HBCU administrative challenges in the 21st Century.

Renick says despite growing interest in the program, the university will resist attempting to increase the size of the cohorts, instead keeping them around an average of 20 admissions per year, and will concentrate on continuing to attract high-quality applicants.

“Most of the participants are professionals in their own right, so we are looking at involving the graduates with Jackson State in a more intimate way whether on advisory boards or helping us identify other professionals for recruitment,” Renick says. “So with the maturity of the program we will call upon the graduates to be more engaged after they graduate.”

Learning From Wilt And Milt