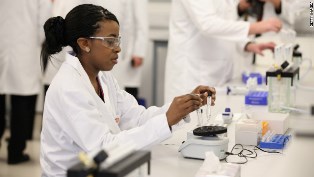 The Million Women Mentors movement — led by STEMconnector, a consortium of companies, nonprofits, universities and others concerned with STEM education — has secured pledges from over 173,000 STEM mentors.

When Kate Lindsey took over her late husband’s construction firm, one of the first things she did was ask the firm’s 22 women engineers to identify the biggest determent they faced going into the field of construction and engineering.

At least two indicated that it was the college instructors who served as their advisers, Lindsey recently told the Women Mayors Caucus of the United States Conference of Mayors.

“My college guidance counselor told me that construction isn’t a field for women,” Lindsey recounted, paraphrasing what the female engineers told her when she surveyed them at Alpha Corporation, an international construction and engineering firm headquartered in Dulles, Virginia.

“I was shocked,” Lindsey said. “It tells me we need to do a better job of educating professors on what they deliver as a message to their students.”

The discouragement that females may face in higher education and elsewhere as they seek to enter fields such as engineering is one reason that Lindsey has lent her firm’s support to Million Women Mentors, a nationwide movement that is designed to mobilize a million STEM mentors to encourage and guide girls and young women into STEM careers.

As of late January, the movement — led by STEMconnector, a consortium of companies, nonprofits, universities and others concerned with STEM education — has secured pledges from over 173,000 STEM mentors, according to its website, although organizers say the actual number is higher and growing by the day.

Julie Kantor, chief partnership officer for Million Women Mentors, said the ultimate goal of the movement is to boost the percentage of women in STEM fields from its current 24 percent to 50 percent.

“I want our daughters to be in an environment where they don’t feel isolated in the workforce,” Kantor said. “We have to build a pipeline,” she said, stressing the need for mentors to help smooth the path for women to STEM jobs.

The Million Women Mentors movement comes at a time when a growing amount of research has found that women are more likely to leave STEM fields than men — with reasons ranging from hostile work cultures to isolation.

Kantor said she hopes to secure pledges from one million mentors by 2018 and to get more companies to offer mentoring, paid internships and apprenticeships. Beyond mentors, Katnor said, females pursuing STEM careers need “sponsors” who speak up for them behind closed doors when opportunities become available.

Kantor said the issue is important for business because it gives them access to talent at a time when there are more STEM jobs than qualified applicants. She said the issue is important to women from a pay equity standpoint because STEM jobs tend to pay women 92 cents on the dollar compared to men, as opposed to 72 cents on the dollar for jobs in other fields. Even if young women don’t enter STEM fields, Kantor said STEM skills will still serve them well because 71 percent of U.S. jobs in 2018 will require STEM skills.

Jane Oates, vice president of external affairs at the Apollo Group, the parent company of the University of Phoenix, said employers often complain to her that it is difficult to retain women in STEM fields.

“We have got to make sure that our young women have information about career choices and once they get into those academic fields, they have the power to stay there,” said Oates, former assistant secretary for employment and training at the U.S. Department of Labor under President Barack Obama.

Oates told the women mayors that it costs nothing to join the Million Women Mentors effort and that it will yield impressive results.

“We promise you if you join us, businesses will see you as a leader in this field,” Oates said. “We don’t have to do anything but show them this website,” she said of the Million Women Mentors website.

“Who better to say that than a mayor saying they’re interested in these young women? I want companies that continue to nurture them,” Oates said.

Diverse Conversations: Why Curriculum Diversity is a Good Plan