Even for those colleges and universities that value diversity to the extent that they have a dedicated officer or dean of diversity, problems of inclusion and support for faculty and students of color may still be an institutional challenge. A single officer or the mere presence of faculty of color does not solve such issues in one fell swoop.

That was the consensus of a panel of faculty and senior administrators of color that discussed institutional issues regarding race at the Association of American Colleges and Universities (AAC&U) annual conference Thursday afternoon.

Inclusion, in terms of numbers, is one of the most basic problems that has historically dogged institutions of all stripes. Panelists said that colleges and universities must continue to work to increase diversity among the student body, faculty and administration.

A related problem, panelists said, was the relatively low premium institutions placed on valuable “service” work such as advising and mentoring. Several on the panel, moderated by Diverse co-founder Dr. Frank Matthews, said that they found themselves spending much of their time advising students, formally and informally.

Dr. Sabrina Wesley-Nero, visiting professor of education, inquiry and justice at Georgetown University, said that students of color sought her out simply for moral support.

“My first few months in my first year I had multiple students of color come to my office and it took me a while I would say to realize they didn’t want anything, they didn’t need anything, until one of them actually said … ‘I just wanted to make sure you were real,’” said Wesley-Nero.

Wesley-Nero explained that the students wanted to have a connection with faculty of color, even if their expertise and areas of study did not align.

Panelist Dr. Toni-Michelle C. Travis, associate professor at George Mason University, said that one year, she had 96 assigned advisees, almost twice as many as some of her peers. Nevertheless, GMU did not formally recognize the extraordinary work she was doing as an adviser — nor did it necessarily count towards tenure.

Dr. Sean Decatur, president of Kenyon College, said institutions need to “build muscle memory” with regards to recruiting faculty and administrators of color, that is think of building a diverse faculty as an ongoing process such that it becomes an essential part of any search process for new faculty. 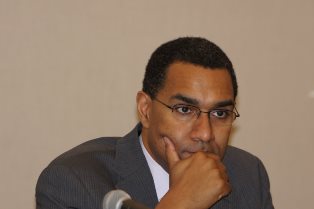 “One of the responses that you hear time and time again is … ‘We looked and there’s no one there,’” Decatur said, adding that this is simply not true.

Dr. James L. Moore III, associate provost of the Office of Diversity and Inclusion at The Ohio State University, spoke to the problem of bringing on more students from underrepresented populations. He said that many factors are at play that might inadvertently discourage universities from recruiting such students.

Many college scholarships start with a requirement of 27 to 28.

A limited pool of students with outstanding scores creates tension, Moore said, between the mission of the land-grant institution to be accessible to everyone, and the university’s desire to do well in the eyes of coveted national rankings. But focusing too much on scores and numbers may mean the college misses an opportunity to help those who need it most.

Moore said that he has been most successful in recruiting minority students by taking a very personal approach, through phone calls or in-person meetings. He noted that he was able to recruit a particularly competitive student to campus with a simple phone call, even thought that student had been accepted to an array of top-ranked private institutions.

Reaching out to parents in diverse communities is an important factor in bringing students to campus. “They want a welcoming environment, and they want to know that you’re going to take care of their child,” Moore said.

The solution to problems of diversity, panelists concluded, was increased intentionality at all levels of the university. Even college boards, they said, ought to be representative of the diverse student population on campus.