South Carolina State University is once again in the hands of an interim president after its board of trustees placed the institution’s latest leader, Dr. Thomas Elzey, on administrative leave with pay.

S.C. State’s board of trustees removed Elzey from his position Monday, just 20 months after hiring him to help fix the institution’s financial and management problems, and just days after giving him a vote of confidence. He will continue to receive his $326,000 annual salary. The board named interim provost W. Franklin Evans as acting president. 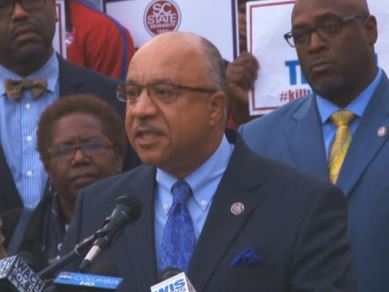 Evans released a statement shortly after the board met in executive session to discuss Elzey’s status. “Under my leadership, we will continue to move forward in preserving the rich legacy of excellence that is SC State University,” Evans stated. “These are critical times at SC State; therefore, it is imperative that we remain focused on the matters most important to the institution’s short- and long-term sustainability.”

He also said he was willing to serve in the position “for as long as I am called upon.”

The board announced it would meet again Thursday. The future of board members remains uncertain. Members of the state legislature in both political parties have called for their dismissal. U.S. Rep. Jim Clyburn, D-S.C., and his wife, Almeta, both alumni of SCSU, also called for the board and president of the university to be removed.

Students had urged state officials to give Elzey more time. Former student newspaper editor Dana Brooks told Diverse, “They must have been expecting a miracle from him. There were years of financial mismanagement before he came.”

Brooks, a senior mass communications major, said, “I’ve been here since 2010 and I can’t even count the number of presidents we have had. The students are concerned about the university’s accreditation, with all these changes.”

The latest round of turmoil at the school began earlier this month when a subcommittee in the State House of Representatives voted to temporarily close and revamp the university, but after student protests and strong alumni reaction, the proposal was dropped in favor of a later plan to replace the board of trustees and fire Elzey. A state senator also introduced a bill to fire the board, whose members are elected by the legislature itself.

The university received a $6 million loan from the state legislature last year so it could keep its doors open. However, it had requested double that amount, so the $6 million was inadequate and simply added to the school’s debt and its mounting deficit.

The state pledged another $12 million loan, but SCSU has received only $1.5 million of that so far. State leaders say the university has not submitted a realistic plan to address the financial crisis.

Elzey’s supporters say the state’s failure to fully fund the HBCU—and then to have legislators complain when the bills are not paid—is part of an underlying plan to shutter the school and disburse its funding to the other higher education institutions.

Meanwhile, the Clyburns proposed that the university’s trustees should be replaced by a board of retired executives and college presidents for the next 18 to 24 months and that legislators should pass a law allowing out-of-state residents to serve as trustees.

They said the university’s breakeven point is 4,300 students but enrollment right now has fallen to below 3,000.

The historical significance of the South Carolina State campus in the civil rights struggle had added heat to the debate over the institution’s future. The university is located in Orangeburg, the site of the infamous 1968 Orangeburg Massacre, in which protesters demonstrating against segregation at a local bowling alley were attacked by South Carolina Highway Patrol officers. Three protesters—two of them SCSU students and one high school student—were killed and 28 others were injured, most of them reportedly shot in the back while fleeing.

“If things continue along the current plane, the legislation to close the school will not be needed,” the Clyburns stated. “There will not be enough students showing up in September to open the doors.”

President Trump Appoints College Presidents to Board of Advisors on HBCUs