Arnwine to Step Down from Civil Rights Committee - Higher Education

Arnwine to Step Down from Civil Rights Committee 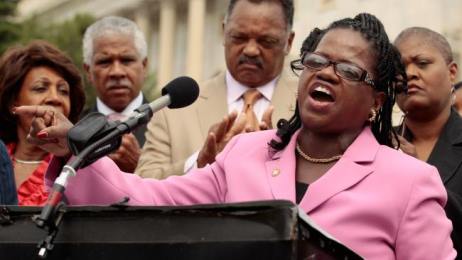 Barbara R. Arnwine, who has headed up the Lawyers’ Committee for Civil Rights Under Law—the national organization created by President John F. Kennedy more than 50 years ago to engage lawyers in racial-equality initiatives—has announced that she will step down in June, after serving for a quarter of a century as its president and executive director.

In a statement released by the organization, Arnwine said that she was looking to pursue other opportunities within the civil rights arena.

“I am honored to have served this great institution since 1989 and look forward to following its future endeavors,” said Arnwine, who began hosting a weekly one-hour radio talk show in the Baltimore-Washington, D.C., area earlier this month. “I anticipate that the Lawyers’ Committee will seek out a bold civil rights leader as my successor with a proven track record, incredible accomplishments and sacrifice on behalf of civil rights.”

Arnwine, who could not be reached for comment, has been the public face of the organization and has become a known figure within the civil rights community. She has been most active in fighting for voting rights and leading the call for education and criminal justice reform.

“I think Barbara Arnwine is a rare combination of cerebral thought and passionate oratory, the likes of which we have not seen in the civil rights community in a long time,” said Rev. Al Sharpton in an interview with Diverse. The civil rights leader and MSNBC television host praised Arnwine for keeping civil rights legislation on the front-burner. “Her work has been challenging and refreshing, and she provided the leadership that put the Lawyers’ Committee on the map.”

During her tenure, the organization tripled its staff and became a visible presence on Capitol Hill and in the White House, pushing both Democrats and Republicans to embrace civil rights issues.

Arnwine had been looking to depart the organization for some time and reportedly was under consideration to replace Ben Jealous as head of the NAACP when he resigned in 2013. But, ultimately, the NAACP board of directors selected Cornell Williams Brooks.

“For 25 years, Barbara has made a profound mark regionally, nationally, and globally on justice movements that make a difference,” said Jones. “It’s taxing to take on systemic racism and other forms of discrimination in courts of law and to do so at the cutting edge of new problems like voter protection after 2000. But Barbara is known to be one who has devoted 25 years of her professional life to this hard and needed work. In many ways, she personifies the highest ideals of the modern legal profession.”

Rosenberg said that Arnwine will hold the title of president emeritus and that a search for her replacement will begin soon.