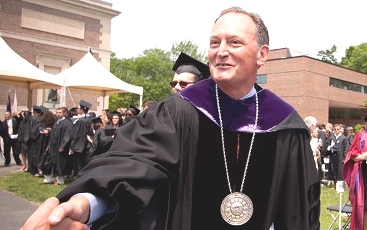 Dr. Barry Mills, who became president of Bowdoin College in Maine in 2001, endeavored to make his alma mater “look more like the rest of America.”

Prior to enrolling at Bowdoin College in the 1960s, Dr. Barry Mills never contemplated the modesty of his life circumstances.

But Mills the freshman quickly learned that his wealthier classmates regularly vacationed in Europe. He had yet to travel by airplane. Mills realized how fortunate he was that Bowdoin officials had crafted a financial package with enough aid so that his father, who did not finish 10th grade, could afford the tuition.

So when Mills became president of his alma mater in 2001, he was determined to increase access and affordability to Bowdoin for low-income families and to students of color who otherwise might not have bothered to apply to the liberal arts institution in Maine, where 95 percent of the state’s population is White.

“For better or worse, this has been my single-minded commitment,” says Mills, who is stepping down as president at the end of June. “It has been my good fortune to financially make this happen without straining the institution.”

Currently, 33 percent of Bowdoin’s 1,800 students are minorities, compared with only 14 percent in 2001. As an example of the lack of diversity back then, the number of African-American students on the entire campus was comparable to the dozen or so Black classmates from Mills’ undergraduate years.

Nowadays, Pell Grant recipients comprise about 14 percent of the enrollment, and a similar proportion are first-generation college students.

In addition to his goal at the beginning of his presidency to make Bowdoin “look more like the rest of America,” Mills says, a chorus of faculty, alumni and trustees clamored for the student body to become more diverse in terms of race and socioeconomic class.

“After college graduation, our young people spend the rest of their lives choosing where they will live and who their neighbors will be,” Mills says. “College is the last time when someone else chooses who their neighbors are. We needed to make that count.”

The process hasn’t been easy.

College officials began recruiting for the first time from urban high schools outside the Northeast corridor in cities with robust minority populations such as Memphis, Tennessee, and El Paso, Texas. Such recruiting got a boost, ironically, from Ivy League schools competing for those same students, Mills says, because Bowdoin sat on the same flight path as the Ivies. Families who visited the better-known institutions were often willing to squeeze in a trip to Bowdoin as well.

But even when these high school students became interested in attending Bowdoin, there was still the matter of affordability, and whether the college could match, much less best the financial aid offers from its rivals. So Mills’ effort to expand financial aid grew even more important.

“Hope is not a strategy when it comes to how to pay the freight,” he says of college expenses.

Mills, who spent two decades as a lawyer negotiating commercial real estate deals and corporate transactions prior to running Bowdoin, became a prolific fundraiser. In 2009, Bowdoin closed a fundraising campaign that reaped $293 million, one-third of it earmarked for aid to low- and moderate-income students.

The college’s endowment reached $1 billion in 2013, its value more than doubling during Mills’ tenure. About 45 percent of the endowment is now restricted to financial aid. Bowdoin has increasingly expanded aid to middle-class families as well, to reduce their dependence on loans.

“Everyone is justifiably concerned about cost,” Mills says, referring to tuition.

A constant thread throughout his presidency has been communication and messaging.

Just a few months after becoming president in 2001, he greeted an incoming freshman class with remarks that included reflections on how, despite neither of his parents attending college, he was able to explore a wide array of subjects that fueled his double major of biochemistry and government at Bowdoin and led to earning a doctorate in biology and a law degree. In speech after speech over the years — whether the audience has been alumni, business leaders or parents of enrolled students — he has stumped for the need to grow financial aid. The same has held true for his published columns.

“I’m candid in what I think and why,” he says. “No college president can reiterate his or her goal too often. I always knew what we needed to do and felt confident even when there were rough spots.”

Although Mills is in the final months of his presidency — Dr. Clayton Rose, a Harvard Business School professor, will replace him in July — he continues to aggressively raise funds for financial aid. He is in the midst of a $100 million campaign that he says will benefit another 90 to 100 students annually. Currently, about 45 percent of all Bowdoin students receive an average of $40,000 in need-based aid — none of it loans — to afford the annual $59,000 retail sticker price, and the student-faculty ratio is 9 to 1.

Considering the milestones and accomplishments that have already come to fruition, it may seem surprising that there was a lack of consensus 14 years ago among college stakeholders over whether to increase the diversity in the student body. However, Mills says that some constituents doubted whether minorities would be receptive to going to a racially homogenous region and, even worse, whether students of color could academically succeed there.

“You have to really believe in the cause to pull this off,” he says of improving diversity. “If you’re straightforward and treat the skeptics with respect, ultimately, they will respect you even if they still disagree. Eventually, they will either come along with you, or at least not disrupt what you’re trying to do.”

College officials made a significant change beginning in the 2008-09 school year when they replaced loans with grants for all student-aid packages, a practice that hasn’t changed.

Although this policy took effect shortly before the 2008 Wall Street crash and the onset of the Great Recession, Mills doesn’t second-guess the college’s timing.

Whereas some institutions revoked their no-loans policies at least temporarily, Bowdoin pressed ahead. They had avoided introducing the grants-instead-of-loans component too soon, says Mills, who recalls that “we calibrated our moves and moved our goalpost at times to fit the needs of our community. I was prepared to take reasonable risks. We moved at an appropriate pace.”

Looking back, he believes he made a compelling case to constituencies to enroll more minorities and low-income students, adding that “if we weren’t able to raise the necessary funds, I would have lost the consensus.”

He has been anything but alone in fundraising.

At the monthly faculty meeting last December, Mills, who usually gives a report at the gatherings, was surprised to see several retired professors in the audience and wondered what agenda item had brought them back to campus.

It turned out that many current and retired faculty had been secretly fundraising amongst themselves, knowing that it was the final year of Mills’ presidency. Dr. Thomas Baumgarte, a physics professor, presented Mills with a framed proclamation and thanked him on behalf of the faculty for his efforts to make Bowdoin affordable to more students.

“We, the faculty, share this passion, and we are extremely grateful for your unfaltering commitment to the support of our students,” Baumgarte said. “That’s why we decided to celebrate, honor and support that legacy.”

More than 170 current and retired faculty had pooled together a total of $70,000-plus. An alumnus donated enough to bring the total to $100,000, enough to endow an award called “The Bowdoin Faculty Scholarship in Honor of Barry and Karen Mills,” referring to the president and his wife.

The first scholarship will be awarded in time for the 2015-16 school year.

At Bowdoin College, Freshmen Only on Campus in the Fall