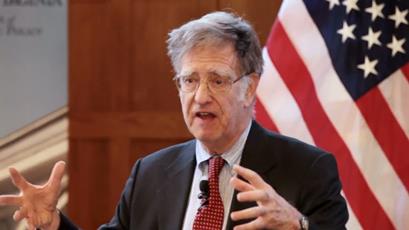 A “dismal outlook” is projected for state higher education funding in most states over the next decade due largely to a “crowding out” of discretionary funding by Medicaid, a new analysis shows.

The analysis — performed by Moody’s Analytics and titled “Crowded Out: The Outlook for State Higher Education Spending” — found that, nationwide, state Medicaid spending will increase as a share of overall state spending to 17.9 percent by fiscal 2024, up from 15.6 percent in fiscal 2013.

“In dollar terms, that equates to as much as $60 billion spent on Medicaid over the next decade that previously would have been available for discretionary items such as higher education,” the analysis states. “The bulk of these costs is incurred beyond 2020, when federal assistance falls to its lowest point.”

The analysis says national higher education spending will correspondingly fall from 12.9 percent in fiscal 2013 to 12.7 percent on average by fiscal 2024.

The anticipated shrinking of state funding for higher education will likely have an adverse impact on low-income students and underrepresented groups, said Ray Scheppach, project director for the National Commission on Financing 21st Century Higher Education, a Lumina Foundation-backed initiative that commissioned the analysis as the first in a series it plans to release in the coming months.

“Let’s face it. As tuition has increased in the last 10 years, it’s had a negative impact,” said Scheppach, who is also a Senior Fellow for Economic Policy at the University of Virginia. “What we’re fearful of is it’s going to continue.

“If you look at the population that needs to be educated in the next 10 years, it’s more heavily weighted toward minorities and low-income people. It will be a challenge because they often come to the table with less education in elementary and secondary,” Scheppach said, echoing statistics that show Blacks and Hispanics have higher rates of enrollment in remedial education than Whites. “So it’s going to be challenging.”

“What that means is, if somebody is eligible, they automatically get the benefit and there’s nothing the state can do to stop it,” Scheppach said.

Higher education spending, on the other hand, is discretionary, he said.

“It pushes higher education to compete with elementary and secondary education, with infrastructure and highways, and criminal justice,” Scheppach said.

“Higher education is the one where states basically have been slowing the rate for some time because universities can get more by increasing tuition,” Scheppach said.

Scheppach was one of several speakers this week at the Education Writers Association annual conference in Chicago, which focused largely on the economics of education.

He spoke at a panel discussion titled “New Insights on State Funding for Higher Education.”

Co-panelist Daniel Hurley, Vice President for Government Relations and State Policy at the American Association of State Colleges and Universities, said the “good news” is that state support for higher education is up.

“Last fiscal year, we actually saw a 5.7 percent increase,” Hurley said. “That was a significant jump that was much needed after the Great Recession.”

Hurley also noted that states are providing about 51 percent of funding to public colleges and universities.

“And we were very close as a nation to crossing that very symbolic line that students and families, that their dollars would be paying for more than fifty percent,” Hurley said. “I’m pleased to announce this past year we saw the pendulum swing for the first time” in several years.

However, Hurley questioned whether that swing was temporary and raised questions about the political climate for higher education. He noted that at least eight Republican governors and one Democratic governor have called for cuts to higher education for the next fiscal year.

He noted that two of the Republican governors — Bobby Jindal of Louisiana and Scott Walker of Wisconsin — have proposed major cuts of $500 million and $300 million, respectively, to higher education in their states.

“Whenever cuts to higher education are suggested, what does that say about the state of the political environment?” Hurley said. “Does it reflect the will of the people?

“I find it fascinating that two presidential contenders are recommending cuts this steep, and, based on whatever intel they have, they can get way with it.”