The Department of Education recently acknowledged that the controversial 2011 changes to Parent Plus Loan qualification standards did, in fact, adversely affect historically Black colleges and universities.

In a report released last week, the department acknowledged that, for the 2012-2013 school year—the first full school year the changes were effective—“PLUS loan amounts declined substantially at HBCUs … and they were not fully replaced by other federal aid,” as department officials previously claimed. The report’s authors found that “At HBCUs the share of families with PLUS loans declined 46 percent, and the dollar amount of PLUS loans fell 36 percent,” which was more than the decline experienced by other institutions. The trend was inconsistent with a previous upward trend.

U.S. Education Secretary Arne Duncan had previously admitted that the revised Parent Plus Loan policy had unintended consequences for HBCUs, but the extent of the impact had not been quantified.[/caption]The report looked at the impact of the policy on HBCUs, other non-HBCUs serving predominantly low-income students and other non-HBCUs serving students from higher income families and found that the adverse impact to HBCUs was significantly greater than the impact on any other institution, even when adjusting for income. Only one-tenth of the decline in PLUS loans at HBCUs was compensated with an increase in other types of federal loans.

The report also found an average of 3.4 percent decline in enrollment at HBCUs across the country as a result of the PLUS loan changes—a larger decline than experienced by other institutions in the same period.

“The research confirms what we all already knew, and not just on the impact of students, but what it’s done to the institutions and then subsequent populations,” said Johnny Taylor, president and CEO of the Thurgood Marshall College Fund.

The report found the decline had the most impact on first-year students, a trend Taylor said he saw coming. 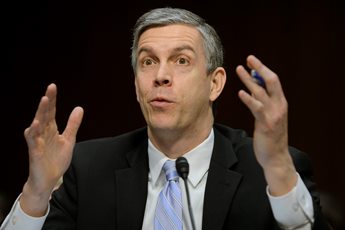 U.S. Education Secretary Arne Duncan had previously admitted that the revised Parent Plus Loan policy had unintended consequences for HBCUs, but the extent of the impact had not been quantified.

“I’ve always argued that it’s not just the student who goes home as a result of Parent PLUS loans; it’s that kid who now goes back to the community that they were able to get out of to go to college, and now they go back with debt and no degree. What message does that send to the children who follow him or her or who are going to?” Taylor said. “What we won’t ever be able to quantify is how many children went back to the community and essentially served as an example for other kids not to go to college. That’s probably the saddest part of this.”

Many in the Department of Education declined to comment on the report, referencing Secretary Arne Duncan’s past admission that the policy had unintended consequences for HBCUs.

“So here you are now, four years later, saying ‘oops,’” said Taylor. “And it’s a non-event to so many people.”

“I think (department officials) thought the results were going to be different,” Taylor said. “Why would you commission a report unless you think the data was going to come back and support your original position?”

White House Initiative on HBCUs Deputy Director Dr. Ivory Toldson said he believes the recent changes to the policy that took effect in March will address many discrepancies raised in the report. Arguing the report’s findings are outdated and do not account for the already-in-place adjustments to the policy, Toldson said, “Since the analyses were completed, the Department of Education implemented a reconsideration process and completed negotiated rulemaking to make (Parent PLUS Loan) approval fairer, but also protect consumers. The changes went into effect in March 2015, and our office is closely monitoring the process to make sure HBCU administrators and students can benefit from the new credit standards.”

Taylor is not as optimistic about the impact of the new changes resulting from the negotiated process.

“Let me get this right,” he said. “You took a dollar from me. You gave me 50 cents back during the negotiated rulemaking and I’m supposed to feel good. That is illogical. Nowhere else would you be harmed and be convinced to celebrate because someone brought you halfway back.”

But Taylor said he does appreciate the administration’s transparency in releasing the report that painted a negative story.

“The real opportunity now for the department and the administration is to acknowledge that the change occurred, it wasn’t congressional, it wasn’t the Republicans,” he said. “You made this change and you now have data that say it hurt and so what are you going to do now.”

“We now know that HBCU students were truly impacted; we know that HBCUs as institutions were impacted,” continued Taylor. Taylor suggested some sort of reparative actions along the lines of financial damages paid to the schools to remedy the damage done.

“It’s one of those things where we have an opportunity now for an administration that is on its way out to make a real statement,” he said. “I know that is incredibly unpopular, but frankly no one was worried about popularity when we deal with gay marriage, no one was worried about popularity on immigration issues, so why does our barometer have to be ‘is this popular’?”