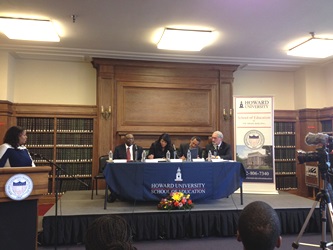 As the racial and ethnic composition of classrooms nationwide continue their shift toward a majority-minority status, school administrations look increasingly dissimilar from the student populations they serve. The Howard University School of Education (HUSOE) plans to establish an academy to train a more diverse cohort of current and aspiring urban school district superintendents.

“Despite all of this diversity in the public school student population, there’s a yawning diversity gap between the nation’s students and the school personnel who serve them,” said Dr. Leslie T. Fenwick, HUSOE dean. Less than 5 percent of the nation’s 14,000 school districts are led by superintendents of color, Fenwick said.

HUSOE will be home to the Urban Superintendents Academy, whose first cohort is slated to arrive on Howard’s campus this summer. Representatives from HUSOE, the American Association of School Administrators (AASA) and the co-directors of the academy signed a memorandum of agreement today at Howard’s Founders Library.

“This is not a generic program,” said academy co-director Dr. Joseph A. Hairston. “Our intent is to talk about the unspoken experiences of urban superintendents.” Hairston said that superintendents contend with complex political and economic pressures on a nearly daily basis but are afforded limited opportunities to learn how to navigate them. The academy is intended to help future superintendents prepare for such situations.

“These leaders must be equipped to work with the dramatic and active demographic shifts and upset the evolving political, economic, and cultural realities that impede administrators from achieving their potential,” said Dr. Dawn Williams Salters, chair of the department of educational leadership and policy studies at HUSOE.

As an extreme example of both how superintendents are entwined within their local communities and the sorts of unexpected social and political problems that affect their work, Gregory Thornton, CEO of the Baltimore City Public Schools, was supposed to be present at the MOU ceremony. Baltimore public schools were closed Tuesday as riots continue to engulf the city, and Thornton was unable to attend the signing.

Although the academy will be national in its scope, it was conceptualized and will be led by former superintendents from the greater Washington, D.C., area. Hairston, current HUSOE assistant professor and USA co-director, was the superintendent of Baltimore County Public Schools until 2012. Hairston’s co-director, Dr. Morton Sherman, is currently the associate executive director at AASA and was the superintendent of the Alexandria City Public Schools from 2008 to 2013.