In the fall of 2010, Dr. Walter Massey assumed the presidency of the School of the Art Institute of Chicago (SAIC).

A prominent physicist, Massey doesn’t consider his artistic talent on the level of the university’s students and faculty; however, he brings decades of creative and cultural interests to the president’s desk. 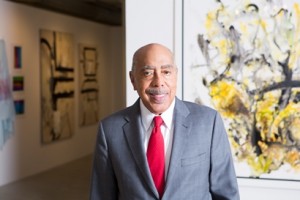 “I think some of that came from my early education at Morehouse when we were encouraged to explore new areas, to be curious and to take risks in learning,” says Massey, a native of Hattiesburg, Mississippi.

Massey entered Morehouse College after completing his sophomore year of high school. “I won a scholarship that was part of a national competition by the Ford Foundation,” he recalls.

With an early interest in arithmetic, Massey eventually focused his studies in theoretical physics as an undergrad. “I found that physics was a way to help you use mathematics to understand the world around you,” he says.

In 1958, Massey graduated from Morehouse, then continued to pursue physics under prominent physicist Eugene Feenberg as a doctoral student at Washington University in St. Louis.

“Earning my Ph.D. helped me to master physics, but it also taught me how to approach learning in general and how to master other fields,” he says.

Throughout his career, Massey has made strides in the corporate sector, government and higher education. A theoretical physicist specializing in quantum liquids and solids, he became the first African-American director of the Argonne National Laboratory, where he had first worked in the ’60s after completing his doctoral studies.

He also served as director of the National Science Foundation, appointed by President George H.W. Bush. In addition, Massey sat on the President’s Council of Advisors on Science and Technology under both Bush presidencies.

In higher education, Massey served as an assistant professor of physics at the University of Illinois at Urbana-Champaign, dean of the college and a professor of physics at Brown University, as well as provost and vice president for academic affairs for the University of California system. Massey has more than 40 honorary degrees and awards for his work in higher education, the sciences and public service, including awards for excellence in teaching.

One of his greatest acts of service was giving back to his alma mater when he became president of Morehouse College in 1995.

“It was very fulfilling. I was there 12 years and they were probably the most overall satisfying 12 years of my professional career — being back at Morehouse and being able to contribute so much to the education of African-American males,” he says.

While the corporate sector and higher education worlds may seem different, Massey has found significant parallels.

“In the corporate sector, the goals of the organization are to develop products and services and, of course, to make a profit. In the education world, your primary goal is to educate and prepare the next generation to achieve and to do research and scholarship to develop new knowledge,” he says.

“However, in some of the corporations that I was involved with — like Motorola for a number of years — [it] had major research laboratories so they were involved in research activities. Also, many large companies that I’ve been involved with are interested in making sure that employees continue to grow and develop, so they’ve invested in training and education.”

In his current position, a wealth of experience is accompanied by room to grow. “I’m learning new things because I’m in a school that’s different [in that] the majority of our courses are in the interest of students in art and design, so it’s both a new experience for me which is very satisfying, but also a place where I feel like I’m making a contribution because of my experience,” he says.

In relating his expertise in science to the varying crafts of art, Massey also sees similarities.

“In some ways, pursuing art is similar to science, in that it allows you to explore areas of your own intellectual and aesthetic curiosity, and it’s a way to learn how to see the universe, the world around you in different ways,” he says. “[These] are the ways that allow people to develop their creative impulse.”

Massey believes that art education should begin far before undergraduate school. In 2014, under his leadership, SAIC implemented the College Arts Access Program (CAAP) in partnership with the Chicago Public School system. Tenth-grade high school students who enter CAAP will study art and design on campus for three years in preparation for admission to the institution or any other postsecondary institution.

Along with programming that Massey has developed throughout the years to bring academic resources to underserved youth, CAAP is an effort to continue this investment, particularly in African-Americans.

“[The graduation rate of African-Americans] has improved tremendously since I first began my career in higher education, but they are not as robust in some areas as I would like, in the sciences for example,” he says. “I think on the whole there’s a positive direction, but the speed at which things are improving is not as great.”

While he can’t do it all, Massey’s achievements continue to be recognized, which drives him further.

“I have students who come to me from Brown, Morehouse and other places I’ve been who say I did make a difference in their lives, so I’m hoping to have that happen here at SAIC, also,” he says.