WASHINGTON ― The Congressional Black Caucus (CBC) on Tuesday became the latest and the most visible group of advocates to call on Silicon Valley technology companies to boost minority employment and participation in their firms. During a news conference held at the Library of Congress, the 46-member caucus, represented by the chair and CBC diversity task force members, launched CBC TECH 2020, a new initiative aimed at boosting African-American inclusion in the tech industry.

U.S. Rep. G. K. Butterfield (D-NC), the CBC chair, described the initiative as one that will “bring together the best minds in the tech, nonprofit, education, and public sectors to increase African-American inclusion at all levels of the technology industry.” 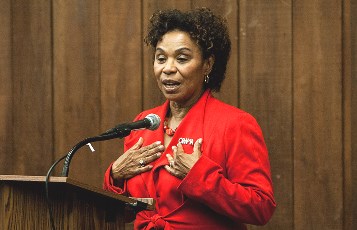 U.S. Rep. Barbara Lee (D-Calif.), in a file photo, was among those supporting the initiative to boost African-American inclusion in the tech industry.

“The CBC and the tech industry share a common goal to transform our society by unlocking the human potential to develop solutions that will improve our lives and those of generations to come,” he told an audience of 200 people at the Library of Congress.

Along with Butterfield and other CBC members, the Rev. Jesse L. Jackson spoke during the initiative launch. Former NAACP executive director Benjamin Todd Jealous, who is now a venture capital executive based in Oakland, Calif., moderated the event at which CBC members highlighted diversity principles and discussed the significance of increasing opportunities for African-Americans in the tech industry.

Butterfield said the CBC is urging high-tech companies, including Silicon Valley giants such as Facebook and Google, to adopt “a TECH 2020 Diversity and African-American Inclusion plan.” Such plans will stipulate that companies make African-American inclusion a priority for their “board of directors and executive leadership, and integrating its commitment to inclusion of underrepresented minorities in the companies’ values statements,” according to Butterfield.

In addition, the CBC is encouraging firms to set public goals for African-American employment at all levels as well as for external contractors and vendors. Firms should provide significant financial and human capital to achieve goals, and they should share best practices to ensure viability of increased minority participation, according to the TECH 2020 plan.

In recent years, high-tech giants have come under pressure to disclose their minority employment statistics and to pledge remedies for their lack of minority hiring and retention. In a 2014 analysis conducted by USA Today, seven leading Silicon Valley firms had just 2 percent Black and 3 percent Latino employees in technology jobs. In contrast, 4.5 percent of new graduates with bachelor’s degrees in computer science or computer engineering from 179 research universities were Black, and 6.5 percent were Hispanic, according to Computing Research Association (CRA) data.

“(The firms) say ‘We can’t find Black engineers.’ Well, USC and UCLA don’t teach them. That’s why they cannot find them. (Black engineers) are on (the East Coast) side of the country,” Jackson told the audience.

Jackson is credited with leading much of the efforts so far that have propelled companies, such as Apple and Google, to release employment data on minority employment.

“One of the things that should happen is that the tech companies … invest in HBCUs and invest thickly and deeply because you have this untapped source of brilliance,” Cleaver told the launch event audience. “The tech companies would serve themselves well to invest large sums of money into recruiting and training young African-Americans for these high-tech positions that are 21st century jobs.”

A representative, along with his colleagues, from the global software firm SAP attended Tuesday’s event and told Diverse about its recent agreement with Delaware State University. “Project Propel Empowered by SAP” will expose Delaware State students, as well as students at other HBCUs, to the latest SAP technologies, according to the company, which is based in Germany.

“We were here today and (Monday) on Capitol Hill talking with various members of Congress about our investment we’re making now into the HBCUs and empowering them with the knowledge of our technology,” said Brian K. Reaves, senior vice president for products and innovation at SAP.

For the past two years, SAP has been working with HBCUs in large part due to a commitment spearheaded by a network of African-American employees at the company. “Impactful change will come” if HBCU students gain access and exposure to SAP and other leading technology firms, Reaves noted.