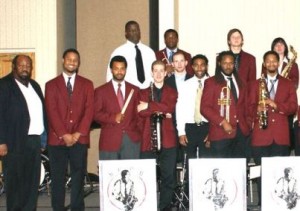 Recent news that an esteemed Jazz education program based at North Carolina Central University (NCCU) was among 46 programs within the 17-campus University of North Carolina system targeted for elimination proved disruptive for the Durham-based historically Black institution.

As it turns out, a number of news media outlets, including newspapers and TV stations, had the story wrong. News organizations had misinterpreted a move by the UNC Board of Governors allowing realignment of NCCU music concentrations as a purging of the undergraduate Jazz studies major.

“We were flooded with calls and emails from people around the country and as far away as Germany, including current students, alumni, incoming students and their parents,” he said.

The NCCU Jazz studies program has brought national and international acclaim to the university largely due to the high-caliber, award-winning student ensembles that Wiggins has led for nearly three decades. Prominent musicians, such as Branford Marsalis, have enjoyed NCCU artist residencies, and others have played in the program’s annual Jazz festival. And the program is one of only two among the nation’s 105 historically Black colleges and universities to offer a master’s degree in Jazz studies.

Wiggins said it caught the NCCU community by surprise last week when final results of the UNC Board of Governors’ biennial Academic Degree Productivity Review prompted news organizations to specifically cite the school’s Jazz studies program as a casualty. Early this past academic year, the 2014 state review had flagged 221 programs, including those of Jazz and theater at NCCU, as “low-producing” based on enrollment and graduation criteria.

While the UNC Board of Governors has approved degree program eliminations and consolidations since 1995, the May 21 vote by the board’s educational planning committee has drawn fire from the public, including critics of the Republican-appointed board. A May 28 editorial from the Star-News newspaper of Wilmington, N.C., took issue with the pattern of program cuts, decrying them as a politically-motivated attack on liberal arts education in North Carolina.

“Music, art and theater programs took big hits, as did programs in African-American studies, women’s studies and Hispanic studies. Programs to train foreign language teachers in French and German were axed at ECU, and math education and Latin were eliminated at UNC-Greensboro. … The ultimate object of this seems to be to retract the UNC system into a network of pre-professional trade schools,” according to the editorial.

“That’s simply wrong. ‘Liberal education’ doesn’t mean studying the collected works of Nancy Pelosi or Rachel Maddow; it refers to teaching students to think independently. That requires exposure to the fine arts, to alien points of view and to foreign cultures,” the editorial stated.

In a move to preserve Jazz studies as an undergraduate major, NCCU officials this past school year chose to bring additional music concentrations under the Bachelor of Music (B.M.) degree category as a way to boost the total number of degree recipients. School officials had agreed that Jazz studies had grown vulnerable as the sole Bachelor of Music program due to enrollment dips. The music department has more than 100 undergraduates majoring in musical disciplines, and fewer than 30 were in Jazz studies this past year.

“Next year, we’ll probably have one of the largest classes graduating, but, if those numbers don’t come up during the time [the UNC system is] doing the evaluation, [programs] can be considered ‘low-producing,’” Wiggins explained, noting that four students received the B.M. degree in Jazz studies last month.

Traditionally, NCCU music students, excluding the Jazz studies majors, have earned the Bachelor of Arts degree in their respective music concentrations. Rather than Jazz studies remaining the only Bachelor of Music concentration at NCCU, incoming 2016-17 and future freshman students will be able to seek their B.M. in ethnomusicology, vocal performance, instrumental performance or music education, according to Wiggins.

“Jazz studies will not have to carry this burden alone,” he said.

Jazz education has “been realigned in the Music Department. That was our proposal, our plan. We go through this every two years. We review our programs, and we have to make adjustments based on our findings. The [jazz] program is not going away. It’s intact,” Dr. Carlton Wilson, dean of the NCCU College of Arts and Sciences, told Indyweek.com, a North Carolina-based publication.

The NCCU’s theater and dance programs have been combined with completion of the UNC biennial academic degree review, according to NCCU spokesperson Kia C. Bell.