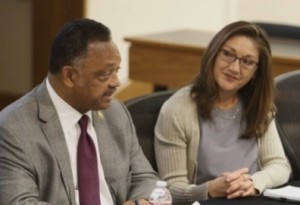 In 2014, Google came in for tough scrutiny when the Silicon Valley-based online search giant released employee diversity statistics showing scant levels of African-American and Latino employment, along with relatively low numbers of women holding technology and management positions. Google then was the first among major Silicon Valley technology companies, including Facebook and Apple, to release such figures in response to calls by fair employment activists to do so.

Earlier this month, the company released its diversity numbers again, revealing negligible progress over the past year. According to Google data, women still hold roughly one-fifth of the company’s tech jobs and leadership positions. Women had slight progress in tech jobs since 2014, moving up one percentage point to 18 percent. African-Americans make up just 2 percent of the company, and Latinos account for 3 percent, both unchanged from last year.

“With an organization of our size, meaningful change will take time. From one year to the next, bit by bit, our progress will inch forward. More importantly, our industry will become more inclusive, and the opportunities for currently underrepresented groups will grow,” wrote Nancy Lee, the Google director of people operations, in a recent company statement.

“I’ll give Google an ‘A’ for transparency and attitude. But they must be bold enough to set goals, targets and timetables to include those who have never been given the chance,” the Rev. Jesse Jackson told USA Today.

Wayne Sutton, a Silicon Valley-based entrepreneur and tech company mentor, shares Jackson’s view that Google deserves credit for its transparency. Like Jackson, Sutton has spoken out publicly on the need for Silicon Valley companies to open their doors to non-Asian minority employees and firms.

The recent employment diversity report “shows a couple of things—one being transparency [and] two that understanding that it’s going to take a lot of work when you have the size of a company like Google” attempting to bring diversity into its technical and managerial ranks, Sutton told Diverse.

Along with publicizing information about company initiatives to establish technology pipeline programs and relationships with diverse higher education institutions, Lee, who is the Google executive leading the diversity charge, has been vocal about bringing to light the challenge the online search giant has faced since making Google employment diversity numbers public in May 2014. The company had more than 55,000 employees at the end of this past March, according to Google.

“When we looked at the research, the demographics of diversity of student bodies at some of the most elite colleges where we tend to recruit were more homogenous than the general college population. So we started targeting more schools,” Lee recently told Wired magazine.

According to Lee, Google has traditionally recruited from a pool of roughly 100 colleges, most of which are top-tier institutions. But starting last year, the company has more than doubled the schools at which it hires talent, and it’s extended its reach to historically Black colleges and universities from which the company is reportedly seeking interns.

In addition, the company has announced initiatives that include “embedding engineers at Historically Black Colleges and Universities; partnering with Hollywood to inspire girls to pursue careers in computer science; building local initiatives to introduce coding to high school students from diverse communities; and expanding our employee unconscious bias training,” according to Lee.

These initiatives and others are being implemented to ensure that Google’s diversity strategy focuses on four key areas: hire diverse Googlers, foster a fair and inclusive culture, expand the pool of technologists, and bridge the digital divide.

“Google is one of the drivers [of tech pipeline initiatives among Silicon Valley firms]. They are doing a lot of these infrastructure and foundational programs. … You’ve got to get that pipeline going early,” said Diana Carew, an economist at the Washington-based Progressive Policy Institute (PPI) and co-author of PPI’s “Tech Opportunity for Minorities and Women: A Good News, Bad News Story” report.

“I think that any effort that gets this pipeline moving in the direction it needs to go is great,” she said.

Carew and co-author Dr. Michael Mandel contend in their newly-released report that, despite the lack of diversity within Silicon Valley-based companies, “college-educated Blacks and Hispanics have benefited enormously from the tech jobs boom” since 2009.

“Indeed, the opportunity tech jobs are creating for non-Asian minorities defies conventional stereotypes. That’s because the tech/info jobs boom is much broader than in Silicon Valley. Tech jobs are increasingly found across all industries and the country. Tech jobs are in finance, education, and government, and urban tech clusters are forming in U.S. cities such as New Orleans, New York, and Denver,” according to the Tech Opportunity for Minorities and Women report.

Trinity College Closes Due to Threats Made After Professor’s Post