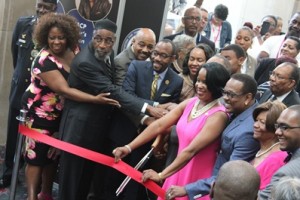 NAACP leaders and supporters cut the ribbon at the opening ceremony of the NAACP’s 106th convention taking place this week in Philadelphia. (Photo courtesy of NAACP)

PHILADELPHIA— Dr. Amos C. Brown’s entry into the National Association for the Advancement of Colored People (NAACP) came shortly after the brutal death of Emmett Till.

Outraged by Till’s murder in 1955 by a group of White men, a 14-year-old Brown turned to Medgar Evers, who eventually helped him to establish the organization’s first Youth Council.

“I went to Medgar Evers because he was a friend of our family,” said Brown of the Mississippi civil rights icon who was later gunned down in the driveway of his home in 1963 by White supremacist Byron De La Beckwith. “I told him I wanted to do something about what those bad, evil White men did to Emmett Till.”

Brown, who now pastors the historic Third Baptist Church of San Francisco, was instrumental in paving the way for the future involvement of thousands of young people in the storied history of the 106-year-old civil rights organization.

“The major media has lied on us,” said Brown, of youth involvement in the NAACP across the years. “They have not told the truth.”

He said that, two years before four Black students at North Carolina Agricultural and Technical State University integrated lunch counters in downtown Greensboro with their successful sit-ins, NAACP youth leaders had already been on the front lines waging a “sit-down” movement in Oklahoma City.

“We must dispel the lie that the student movement began in Greensboro, N.C.,” Brown told thousands of participants who gathered at this year’s NAACP convention. “If truth be told, we have not told our story right because too many adults have been delinquent in passing from one generation to the next what God has done for us.”

Over the past few decades, the NAACP has faced a flurry of criticism from those who claim that the organization founded by Dr. W.E.B. Du Bois, Ida B. Wells and others has not done enough to bring young people—particularly college students—into the fold.

But Brown—who as an undergraduate at Morehouse College in Atlanta was one of eight students enrolled in a course with Dr. Martin Luther King Jr. in 1962—dismissed the critics.

“There’s never been a generational gap,” he said, pointing to the seven slots that young people occupy on the 64-member board. “Even back in our day, the adults sat back and gave us advice, but we led.”

Erin Gaddis, a senior at Baylor University and president of the NAACP Texas Youth & College Division, said that membership among college students across her state has been on the rise in the wake of the police killings of Eric Garner, Michael Brown and Freddie Gray.

“A lot of our growth is because of social media,” said Gaddis. “We’ve been able to fuel the passion behind the movement, and our membership has skyrocketed especially after Ferguson.”

The death of several unarmed Black men like Garner, Brown and Gray is one of the themes at the five-day conference that will bring presidents Obama and Clinton to the City of Brotherly Love later this week.

Baltimore City State Attorney Marilyn J. Mosby, who is prosecuting the six police officers involved in Gray’s death, said that reforming the criminal justice system was a dream of hers ever since she graduated with top honors from Tuskegee University.

In a rousing speech, Mosby said that, despite her high grades from Tuskegee, she was initially wait-listed from every law school because of her low LSAT scores but later gained admission into Boston College.

And her journey to becoming the nation’s youngest prosecutor was wrought with additional challenges. She failed the bar exam on her first try.

“Failure is not fatal,” she said. “I am the benefactor of the courage and wisdom of our ancestors who paved the way for me. Our success is the byproduct of the fruits of someone else’s labor.”

Mosby said that the fight for social justice is ongoing.

“We have work to do, and our time to do it is now,” said Mosby. “The battle lines and the cast of characters may have changed, but turn on the news, the struggle continues.”