USDA Pledges to Continue to Give 1890 Schools a Hand 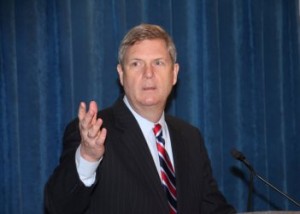 USDA Secretary Thomas Vilsack said “there is tremendous potential for the young people that are going to college and university at the 1890s.”

WASHINGTON ― The Secretary of the United States Department of Agriculture, Thomas Vilsack, outlined a series of initiatives that the USDA will undertake to help the 1890 land grant institutions. Vilsack spoke at a convocation Thursday at the Library of Congress commemorating the 125th anniversary of the signing of the Second Morrill Act.

Congress created multiple land grant colleges and universities in 1890 with the Second Morrill Act, 19 of which became some of the historically Black universities of today. At a hearing at the House Committee on Agriculture on Wednesday, presidents of six of those universities spoke about the challenges that their institutions face and the achievements they have made despite obstacles.

Although the schools have made remarkable achievements in terms of agricultural research, student development, and local outreach, they do not always get funding in proportion to the critical work they do. As several speakers at the convocation noted, the 1890 institutions work with many students who are low income and may be the first in their family to go to college. They also work with surrounding communities through Agricultural Extension Programs, a diverse set of programs tailored to the needs of low-income farmers and landowners in the local communities.

That community outreach is critical, said Audrey Rowe, administrator at the USDA Food and Nutrition Service, because many of the residents in which the 19 institutions are situated suffer from food insecurity. She said she looked into the rates of food insecurity among children living in the counties where the 1890 institutions are located.

“I found rates of food insecurity for children from 20 percent in Kent County, Delaware, to 30 percent in Peach County, Georgia. However in no county did I find less than 20 percent of the children where these institutions are residing that are food insecure,” Rowe said. “We have work to do.”

More recently, the USDA/1890 Task Force announced that it will create three new Centers of Excellence. At the convocation, Vilsack said that the USDA plans to support this initiative by aligning each center with a lead agency at USDA. One of the centers, which will be dedicated to small farms, ranches, and forests in high poverty areas, will work with the National Resources Conservation Service (NRCS). The other two centers, dedicated to workforce development and international development, respectively, will be led by the Animal and Plant Health Inspection Service (APHIS).

“We want to work in partnership so the 1890s can make sure that each one of these centers realizes its fullest potential,” Vilsack said.

To help support the creation of the centers, Vilsack announced that a number of agencies within the USDA have put together a fund of $1 million in start-up capital. He said that he anticipates an additional $22.5 million will be made available to the universities and colleges by Sept. 30 to develop teaching, extension, research, and international capacity building.

Vilsack also suggested that the USDA and the 1890s collaborate to create a 501c3 organization that can reach out to existing foundations for funding to help start up the three centers. “We will work closely with the 1890s to make that happen,” Vilsack said.

Vilsack also announced that the USDA’s Agricultural Research Service (ARS) will play a larger role in the professional development of 1890s faculty. The USDA will establish a fellowship available to early career and tenure track faculty within 10 years of obtaining their Ph.D. to conduct research with ARS. Faculty will have the option of applying for a working sabbatical with ARS that would last anywhere from six or 12 months. Vilsack said that the USDA would invest up to $500,000 a year in the fellowships.

“We see that there is tremendous potential for the young people that are going to college and university at the 1890s. We recognize and appreciate that it is not enough in today’s world to offer a young person a quality education. We also have to provide them an opportunity to take the next step in their career,” Vilsack said.

Stopping the Raid on Student Aid