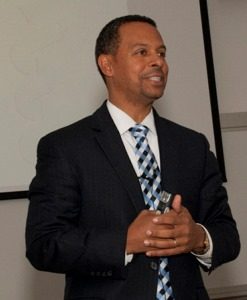 Dr. Marc Nivet, chief diversity officer for the Association of American Medical Colleges, says he has been encouraged by the response to the report.

There were 1,410 Black male applicants to medical school across the country in 1978. The number decreased to 1,337 in 2014, according to a new report titled “Altering the Course: Black Males in Medicine,” which was released this week at the National Medical Association’s 112th National Convention in Detroit.

Health care educators and presidents of some of the nation’s historically Black medical colleges spent the week strategizing over how best to increase the applicant pool, while also working to help more Black males gain admittance into medical school. In 1978, 542 Black male students enrolled in medical school, compared to only 515 in 2014.

“The purpose of the report is to highlight the serious decline and to examine the barriers that caused the decline and to discuss possible solutions,” said Dr. Marc Nivet, chief diversity officer for the Association of American Medical Colleges. He said that more than 300 individuals attended a special session at this week’s convention focused on the issue. “I’m encouraged by the response. I think that the reason for the interest is that people intuitively knew that this was a problem, but they were shocked that we’ve lost ground since 1978.”

The report highlights research and data from various sources to help explain the trend and points to lower participation rates among Black males in science, technology, engineering and math (STEM) fields as a major cause that affect the medical school applicant pool. It also cites a disproportionate number of young Black men in underperforming K-12 public schools that often have fewer resources, which can lead to negative school experiences.

“We have to redouble our efforts in the health professions to improve the talent pipeline of African-American males in order to have a physician workforce that is representative of the population,” said AAMC President and CEO Darrell G. Kirch. “The nagging challenge of health disparities requires all the best minds and perspectives. ‘Altering the Course’ is just the first step in identifying the problem. The AAMC looks forward to working with the NMA to begin implementing solutions.”

AAMC has been pushing its member institutions to utilize a holistic review of applications during the admissions process. This process takes into account other qualities beyond grades and test scores, such as an applicant’s personal characteristics, experiences and attributes.

“Holistic review in admissions is an important part of the solution, but we need to have a bigger pool of Black males applying to move the needle in a meaningful way,” said Nivet. “It is true that more Black men are in college than ever before, but not enough of them are choosing the health professions as a career. We have to understand better why that is and lead the way in helping them see medicine as a rewarding and viable option.”

The Road to Psychological Recovery