Scholarships Open Door to College for Children of Incarcerated Parents 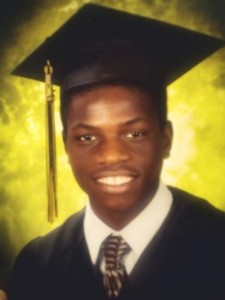 Alijah Nelson is one of eight students to win a scholarship from Ava’s Grace.

When Alijah Nelson began to search for local scholarships, an organization that awards scholarships exclusively for children of incarcerated parents caught his attention.

“There’s a lot of crazy scholarships for crazy things,” Nelson recalled. “And this was just so unique to me and my situation,” he said of the scholarships being offered from the Ava’s Grace Scholarship Foundation,  a scholarship organization started in 2010 on behalf of children of incarcerated parents in the St. Louis region.

Nelson—who wrote an essay about how his parents landed in prison after dealing drugs out of the family’s St. Louis apartment as part of his scholarship application—is one of eight students to win a scholarship from Ava’s Grace.

The scholarships are from $3,000 to $5,000 and are renewable for four years. This is the first year that 75 percent of the scholarships from Ava’s Grace were awarded to young Black males. That decision stems in part from a large donation made to Ava’s Grace in the wake of 18-year-old Michael Brown’s shooting death last year at the hands of a Ferguson, Missouri, police officer that sparked nationwide protests over police brutality and the use of excessive force against young Black men.

Nelson plans to use his scholarship to attend Gustavus Adolphus College in St. Peter, Minnesota, this fall. He said the Ava’s Grace scholarship is important to him “mainly because I’m a first generation student and it helps me overcome the financial barrier of higher education that can scare most people away.”

“It’s a meaningful scholarship because my parents’ incarceration time was a turning pivotal point in my life,” Nelson said. “Also to be rewarded for overcoming such a barrier means a lot.”

Ava’s Grace is one of a small number of organizations that provides scholarships for children of incarcerated parents.

Experts say there is a need for more such efforts to be made on behalf of the nearly three million children in the United States with a parent in jail or prison on any given day.

“They deserve special attention because they face many significant barriers in their lives,” said Bryce Peterson, a research associate at the Urban Institute’s Justice Policy Center. “Compared to other kids, they are also more likely to face economic strain, experience housing instability, be at risk of a variety of behavioral and emotional problems, and fail or drop out of school.”

Nelson wrote about such instability after his parents began to sell drugs out of their third-floor apartment in St. Louis. Previously, Nelson wrote, his father worked at a fast food restaurant and his mother was a hairstylist.

The utilities were often shut off, he said, but the lights stayed on after his parents started serving clients of a different sort.

“Random strangers would pound on the door, waking us up on school nights,” Nelson wrote. “Curious, I asked my parents what was going on.

“They simply told me the truth when they could have easily sugarcoated the situation,” his essay continued. “My parents had become drug dealers.”

Nelson went on to describe the fallout that ensued when his father became incarcerated—how Nelson and his two older brothers and younger sister had to go live with their grandmother due to the fact that they were living in an unsafe environment.

He spoke of the anxiety that he experienced when he would visit his father in prison.

“Not knowing the system at the time, I thought we were going to go pick him up and bring him back home with us,” Nelson wrote. “When the guard came to get him to be placed back in the facility, I felt that feeling of being separated again.”

Despite having an incarcerated parent, Nelson fostered his love for science, which began when he was a little kid who resorted to an unconventional way to disassemble his toys so he could see how they worked.

“My parents couldn’t afford tools, so instead I would drop the toys from the third floor window and gravity would do the rest,” Nelson wrote. “My parents tried to collect the pieces for me to throw them away, but I stored them in a shoe box instead, saving my experimentation for later.”

Ava’s Grace was launched in 2010 by St. Louis resident Stephanie Regagnon, whose mother was imprisoned when she was a young adult.

There is at least one other organization that awards scholarships to children of incarcerated parents. It is called Creative Corrections Education Fund, and it was launched in 2012 by Percy Pitzer, a former federal prison warden, and his wife, Sununt.

Similar to Ava’s Grace, a major focus of Creative Corrections Education Fund is to “break the cycle” of incarceration.

“It’s just that these particular kids have a much greater chance of being incarcerated themselves than probably anybody else,” Pitzer said. “They follow in their parents’ footsteps.”

Pitzer’s organization has awarded 92 scholarships for $1,000 a piece since its inception.

“That helps them, believe it or not,” Pitzer said. “When you don’t have anything, a thousand dollars is a lot.”

Indeed, various research and surveys have found that some students were prevented from continuing from one semester to the next by as little as $500.

Nelson—who first heard about Ava’s Grace while participating in the academic enrichment program at College Bound St. Louis—likely won’t have that problem. His $5,000 renewable scholarship is worth ten times that amount.

Nelson said he decided to go to college out of state on the advice of relatives who encouraged him to “go past St. Louis and see something different.”

He also didn’t want to fall into the same trap of his older brothers.

“My older siblings who went to local colleges would come back home and never go back (to college),” Nelson said. “So they really played a huge role in my decision to go out of state.”

Nelson said both of his parents are back home, working and “staying out of trouble.” He said other young people who are experiencing childhoods similar to his should stay hopeful despite the odds.

“To those growing up in the same circumstances as me I would say go seek opportunity and don’t be afraid to ask for help,” Nelson said. “Don’t fall victim to your situation and dig yourself into a ditch.

“Dream big and be bigger than your situation,” Nelson said. “Your decision to change and do better will inspire so many around you.”

Getting to Know Melody Rodriguez