Northwestern Halts Changes to Its ‘Black House’ Amid Protests 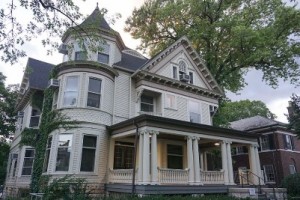 Photo courtesy of For Members Only, a student organization at Northwestern University.

Northwestern University students and alumni said they will continue to battle proposed changes in the building that houses the Department of African-American Student Affairs after administrators postponed the plans Sunday.

Known colloquially as the “Black House,” the Victorian-style house on Sheridan Road has been the center of Black campus life since 1972, four years after a group of 110 Black students staged a 38-hour takeover of the bursar’s office.

Members of the campus and alumni community were blindsided when an email blast sent Friday outlined plans to relocate administrative offices to the Black House and the Multicultural Center. Of particular interest is the Black House, as that space has long been designated for Black students on campus as part of an agreement between Black students and administrators to end the 1968 takeover.

“I actually believe that it wasn’t their [administrators’] intent to either be disrespectful or be dismissive of the Black experience,” said Dr. Jeffrey Sterling, president of the Northwestern University Black Alumni Association. “That said, that doesn’t give you a free pass if a mistake was made. Whether by intent or execution, when mistakes are made, they have to be called out and addressed.”

University administrators refused to comment for this article, instead sending a copy of the statement by Patricia Telles-Irvin, vice president for student affairs. In the statement, Telles-Irvin wrote that the move had been postponed and that the university will hold four discussions during the fall quarter to garner feedback from interested students and alumni. The university will also form a Black House Facilities Review Committee to come up with recommendations based on the four meetings.

That this plan was put into place during the summer and without sufficient student and alumni input made it even harder to swallow. Classes don’t begin until Sept. 23.

“It feels like they wanted as little resistance as possible,” said Morgan Campbell, a 1999 journalism graduate who played for two years on Northwestern’s football team. “If it was this urgent, they wouldn’t have been able to postpone it; you could have always done it in the fall. “

Campbell, a sports reporter for the Toronto Star, said the Black House for him was an “oasis”— a cultural touchstone and a place for him to feel more connected to other Black students. “The Black House is special for very specific reasons; if you start changing it—unless it’s to further what this community is and means—then it’s not special.”

On May 3, 1968, nearly all of Northwestern’s Black student population staged a sit-in at the bursar’s office. They presented a list of demands, including the establishment of a campus home for Black students who felt isolated and threatened on campus. “We demand a Black Student Union, a place to be used for social and recreational activities,” the 1968 petition read. “Black students have nothing at Northwestern to call our own. We need a place where we will feel free to come and go as we please.”

This latest plan had the university moving staff offices from Campus Inclusion and Community into the Black House and the Multicultural Center this fall as part of restructuring. This plan would have reduced the spaces available for several student groups, including For Members Only (FMO), a Black student organization that is headquartered at the Black House.

“I was confused as to why these offices were being moved into the Black House, as if the university couldn’t find any other space or build any other space,” said Cariana Chambers, a rising junior who is FMO’s vice coordinator of programming.

The Black House is prime real estate, located on south campus’ main drag, and alumni and students have fought off proposed changes in the past. This time around, in just two days, alumni and students were mobilized during an hours-long conference call, through the web, social media and email—all in an effort to encourage students to contact top university administrators and urge them to reconsider the plan.

Anthony Armstrong, a professional photographer in Miami, sent an email and shared parts of it on Facebook. Armstrong, who earned a degree in economics from Northwestern in 1993, said in an interview that the move by the university in the current social climate was more than puzzling.

“The university is exhibiting tone deafness in making this decision at this particular time in history,” Armstrong said. “Black folks are feeling under attack from a number of different angles. For the university to make this move now, especially when there was no consultation, shows a real lack of understanding of the times in which we live.”

Sterling, a prominent physician in Texas, said this most recent disagreement is an example of results falling short even when “good people” are involved with trying to make the student experience better. “In this specific example, decisions were made without regard to a nearly-50 year promise the university has made to African-American students,” he said. “The conversation was no longer about the proposed changes, but about the violation of the covenant that existed between the university and African-Americans, and the breach of trust along those same lines.”

Moving forward, Chambers said there will be even more involvement at the student and alumni levels. “There’s still work to be done,” said Chambers, a learning and organizational change and economics major from Minneapolis. “Just because they postponed it now and are having these forums to listen to us, it doesn’t guarantee that the move would never happen.”

Kimberly Davis is a 1996 alum of Northwestern University.