Public Rallies Around 9th Grader Arrested in Error in Texas 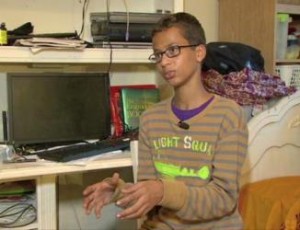 High school freshman Ahmed Mohamed has garnered support from around the nation.

A ninth-grader in Texas was arrested Monday after a clock he’d invented was mistaken for a bomb.

Ahmed Mohamed took his device to school to show an engineering teacher and was suspended after school officials determined the invention resembled a bomb. Police were called and Mohamed was arrested and detained for questioning, before finally being released.

Social media erupted in support of the high school freshmen, as many around the country decried what they considered the Islamophobia behind the school’s actions.

“This happened in Texas but make no mistake, with extent of anti-Muslim stereotyping in the US, it could happen anywhere,” tweeted Yousef Munayyer, a researcher on issues surrounding the intersection between foreign policy and domestic policy and its impact on terrorism and civil liberties and executive director of the U.S. Campaign to End the Occupation in Israel.

Many tech heavyweights, including executives from Twitter and Google and Facebook CEO Mark Zuckerberg, have also voiced their support for Mohamed on social media, inviting him to consider internships and join science fairs.

“Having the skill and ambition to build something cool should lead to applause, not arrest. The future belongs to people like Ahmed,” said Zuckerberg. “Ahmed, if you ever want to come by Facebook, I’d love to meet you. Keep building.”

President Obama also chimed in via his @POTUS Twitter account, saying, “Cool clock, Ahmed. Want to bring it to the White House? We should inspire more kids like you to like science. It’s what makes America great.”

Adding to the outcry of public support, Mohamed has also been offered a lifetime membership in the Dallas electronics club, a scholarship to NASA’s Space Camp in Huntsville, Alabama, (“Creative minds are always welcome at Space Camp, and we appreciate donors who help them come. Someone has provided a scholarship for Ahmed,” tweeted @SpaceCampUSA), and an invitation to visit the telescope lab at The University of Texas at Austin.

Supporters have also established a scholarship fund for Mohamed’s future college expenses via GoFundMe and there have even been offers to fund his private school tuition because his current high school “doesn’t deserve” him.