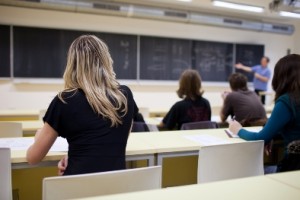 Students perform better in classes taken with teaching assistants who come from the same racial background, according to a new paper that purports to be the first ever to examine TA-student race relations.

The authors of the study say understanding how TA race influences student outcomes is particularly relevant in light of the “dramatic shift” in the racial composition of college students in the United States.

“Understanding how TA race influences student outcomes is particularly important given recent trends in the US,” states the paper, titled “TAs Like Me: Racial Interactions between Graduate Teaching Assistants and Undergraduates.” The paper notes that, whereas 82 percent of undergraduates in 1976 were White, in 2013 only 57 percent of all undergraduates were White.

The paper—released Monday through the National Bureau of Economic Research—was written by economics professors Lester Lusher and Scott Carrell, both of UC Davis, and Doug Campbell, of the New Economic School in Moscow, Russia.

The researchers found that students were more likely to attend optional discussion sections and office hours when the TA had a similar racial background. This finding provides “direct evidence of students responding to similarly-raced TAs,” the paper states.

The researchers found that race had a stronger effect in classes where TAs had been given a copy of the exam in advance of the exam date, but not because of anything sinister.

“We interpret this result as evidence of ‘teaching to the exam,’ where TAs divulge information that is pertinent to the class’ exams if given the opportunity,” the paper states. “Students who are more likely to interact with the TAs by attending the TAs’ discussion sessions and office hours are the beneficiaries of teaching to the test.”

The researchers also found that race had the strongest effect in classes without multiple choice answers on the exams.

“This result could stem from several possible explanations,” the study states. “First, critical thinking is typically a key component to success on essay-based questions, and critical thinking skills may be fostered in settings where students discuss and ask questions about the course material, such as in TA discussion sessions and office hours.”

But the TAs might also be subconsciously responding to students of similar race through grading, the researchers suggest.

“Classes with no multiple choice exams are classes where TAs have to exercise more subjective judgments when grading, and students of specific races may be more likely to answer non-multiple-choice questions in a manner which TAs of similar race favor,” the study states.

Though the study, which notes gaps in the rate of college completion between Black and Hispanic students as opposed to White and Asian students, purports to have implications for ending those gaps and the income inequality that ensues as a result, the study itself is limited.

For starters, the researchers only examined student grades in economics classes at a large, selective public university in California from 2003 to 2011. Further, they only broke the TAs down into two groups: Asian and non-Asian.

Still, that was enough for the researchers to observe that Asian students receive a 2.3 percent of a standard deviation increase in course grade when the racial composition of the TAs is entirely Asian.

Similarly, non-Asian students see a 3.7 percent of a standard deviation increase in course grade when enrolled in a class with all non-Asian TAs, the study states.

“The summation of these two estimates is statistically significant, suggesting that students perform better when taking a class with TAs who are of a similar race as themselves,” the researchers conclude. “From our model with both class and student fixed effects, we predict a statistically significant 7.7 percent of a standard deviation increase in course grade when students are matched to TAs who are all of a similar race as themselves.”

Assessing the Academy for 21st-century Performance