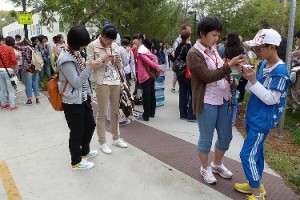 STORRS, Conn. — The multitudes of Chinese students attending American universities are approaching college as less of a life experience and more as a transaction, educators worry, leading to measures to help them integrate — including broadcasting football games in Mandarin and giving them orientation before they even leave Asia.

While students of similar backgrounds naturally flock together anywhere, the integration question is being discussed with urgency in relation to Chinese students because of their sheer numbers. On American campuses, where they number in the hundreds or thousands, it is easier for them to find friends who speak the same native language and form insular communities.

The experience of Anyi Yang, a 19-year-old University of Connecticut sophomore from Beijing, reflects some of the challenges.

When she arrived in the United States, it was a member of a Chinese student group who picked her up at the airport. An applied math major, she has gotten to know some of her American peers through coursework, and she cheered alongside them as she watched a broadcast of the women’s basketball team winning a national championship. But she spends nearly all her free time with Chinese friends. She had expected Americans to be more welcoming.

“They are friendly, but some I thought would be more interested in talking to me,” Yang said. “Actually, they seldom speak to me if I don’t speak to them.”

Where administrators and analysts of U.S.-China relations see missed opportunities for exchange, some professors also see a disconnect affecting their classrooms as Chinese students, in general, participate less in discussions.

“They like to stay with each other, and it’s getting the attention of a lot of our professors,” said Yuhang Rong, an assistant vice provost for global affairs at UConn, which counts more than 300 students from China in its freshman class.

With the rise of China’s middle class, the number of students it sends to the United States jumped to 274,439 in the 2013-14 school year from 61,765 a decade earlier, according to the Institute of International Education. Graduate students account barely for the biggest group, but undergraduates from China have been gaining quickly.

Robert Daly, director of the Kissinger Institute on China and the United States at the Wilson Center, said some of today’s students have a different attitude from the Chinese who came as pioneers in the 1980s and 1990s.

“There’s not a sense of coming to America, like an older generation, so much as buying a credential to get a better job,” he said.

At Big Ten public universities, which began a big recruiting push in China several years ago for students and their tuition dollars, the integration of Chinese students has become such a pressing issue in the past couple of years that they now hold regular summits to discuss strategies.

The University of Illinois, which enrolls nearly 5,000 Chinese students on a campus of some 44,000 students, began holding “Football 101” clinics a couple years ago and introduced Mandarin-language broadcasts this fall. Mike Waddell, senior associate director of athletics, external operations and strategic communication, said he has seen the students at games listening to the broadcasts through their smartphones.

“It’s such a big part of the Big Ten culture that we wanted to make sure we reached out to students and made them feel very welcome,” Waddell said.

At Purdue, one of several schools that now hold pre-departure orientation sessions in Chinese cities, Michael Brzezinski, dean of international programs, said officials begin stressing to incoming freshmen even before they arrive in Indiana the importance of engaging with other students.

Ohio State has developed programs to encourage domestic students to interact with international students, including joint tours of nearby cities. Purdue prods student groups to do more with international student groups by offering additional money for joint events, and it’s trying to create training programs for students on intercultural competence. UConn, likewise, is having discussions on expectations of “global competencies” for faculty and staff.

Local Chinese consulates are also involved. In meetings with freshmen from China on campuses around the Northeast, Zhang Yang, of the New York consulate’s education office, said officials encourage them to study hard, be good student ambassadors, make new friends, and learn and adapt to campus culture.

Kevin Zhuang, a UConn student from Shanghai, said the biggest challenge for most students is the language barrier. The campus experience, he said, really depends on the student.

“We have some Chinese students who are really outgoing who have a lot of American friends,” he said. “We also see people who stay at home all day and just hang out with Chinese and don’t want to speak English at all.”