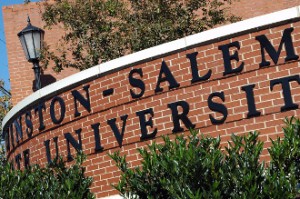 U.S. District Judge William Osteen Jr. said a trial is necessary to resolve some of the allegations lodged against Winston-Salem State University.

Winston-Salem State University (WSSU) and one of its faculty members must continue to defend parts of a lawsuit alleging reverse discrimination against a White assistant professor of management, a federal judge in Greensboro, North Carolina, has ruled.

Dr. Melissa Mann, who filed the case, joined WSSU in 2010. She contends that the university has a “longstanding culture and problem with harassment of some non-African American employees by certain members of the School of Business.”

The suit accuses WSSU of “maliciously” preventing her from getting tenure, promotion and raises while “less qualified” Black faculty members did receive raises.

Specifically, Mann alleges that a tenured African-American full professor in the department created a hostile work environment and used her position on the WSSU tenure committee to discriminate. That alleged misconduct includes a “string of hostile, false and derogatory emails” about Mann, as well as threats and bullying.

The employment discrimination and retaliation suit also accuses the university administration of failing to take adequate steps to end the hostile work environment. However, Mann acknowledged that WSSU did take some “remedial steps,” such as removing the colleague from discussions of Mann’s personnel matters and admonishing the colleague to stop sending “venomous” emails.

In his decision, U.S. District Judge William Osteen Jr. said a trial is necessary to resolve some of the allegations.

Mann “has stated plausible claims of discrimination and retaliation under Title VII against WSSU and under Section 1981 and Section 1983 against” the colleague, Osteen said. He also allowed Mann to seek punitive damages from the colleague.

At the same time, Osteen ruled that the university, as a state agency, is immune from liability under Sections 1981 and 1983 and said the colleague cannot be held personally liable under Title VII.

A former fixed-term lecturer at the University of California, Merced can pursue a race-discrimination claim stemming from his non-reappointment, according to a federal judge in Fresno.

Although the university presented substantial proof of Dr. Loren Qualls’ poor teaching and other shortcomings, the co-director of its writing program had written a laudatory recommendation for him.

The reference letter stated that Qualls was not reappointed primarily for budget reasons and secondarily because of program adjustments. The letter said the termination “does not reflect a negative judgment of his overall teaching or service.”

The university initially hired Qualls, who is African-American, in 2008 under the first of three annual contacts.

During those years, he received performance evaluations critical of his teaching style, according to the decision. He also was criticized for submitting a document that appeared to be plagiarized, for submitting an unauthorized grant proposal and for poor attendance at contractually mandated meetings and lecturers.

In 2011, he was among 11 instructors on a tentative non-renewal list because of the writing program’s $600,000 budget deficit. Eight of them were able to retain their job, but Qualls wasn’t, the decision said.

He sued the university for allegedly violating Title VII and defamation.

Rejecting the university’s request to dismiss the entire case, O’Neill said that, “although there is indeed considerable evidence of his alleged deficient job performance,” a jury could reasonably find the co-director’s reference letter as showing Qualls performed his job competently. Thus the letter conflicted with the university’s argument that it had a legitimate non-discriminatory reason for not renewing Qualls’ contract.

However, O’Neill did throw out a defamation claim again the co-director and two other faculty members, ruling that Qualls waited too long to sue on that claim.