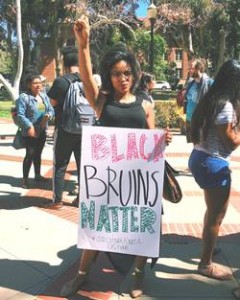 After a Kanye Western-themed fraternity party at the University of California Los Angeles saw students donning “baggy clothes, plumped lips and padded bottoms” and “foreheads covered in charcoal,” as reported by the university’s student newspaper, many students took to social media to express their dismay and reinforce the idea that #BlackBruinsMatter.

“The party connects to a longer history of blackface and dehumanization of Black people going back to the 19th century. It also reflects a profound disrespect for Black culture, specifically hip-hop, which is often trivialized and not taken seriously as a culture with roots in histories of Black and Latino/a struggles for survival and recognition,” said Dr. Chad Williams, an associate professor of African & Afro-American studies at Brandeis University and a 1998 graduate of UCLA who served as the chair of the African Student Union while on campus. “UCLA’s frat culture is extremely exclusionary and often blatantly White supremacist. The party sends a disturbing message about how some students view Black people, at UCLA and beyond.”

The incident, many say, was the latest in a long line of incidents that create an uncomfortable environment for students of color on the campus.

Third-year transfer student Aman Williams said that, “while the incident … prompted #BlackBruinsMatter demonstrations, the movement itself is in response to prolonged racist anti-Black sentiments which has plagued the Bruin community at large for quite some time. From my observations the Black Bruin consensus is the university continues to foster a campus climate not conducive to student success by failing to take action against issues of racial inequity.”

Aman Williams said that many have missed the underlying campus climate that has undergirded the most recent activism.

“The reality is the university has been grossly negligent for many years in addressing the concerns of the Black Bruin community. UCLA has not instituted initiatives to deconstruct oppressive capitalistic policies, neo-colonial models of education pedagogy, divested of corporate imperialism, nor done anything substantive to combat the micro-aggressive nature of the racist anti-Black campus climate,” he said. “In many ways, UCLA as an institution serves to propagate the abuse and exploitation of Black people on campus and beyond. This is what has sparked the uprising of the Black Bruin community.”

According to university data, the campus has a roughly 4 percent Black enrollment ― fewer than 2,000 students on a campus of more than 43,000.

“Los Angeles, and UCLA specifically, present themselves as very diverse,” said Chad Williams. “However, the reality is that Los Angeles has historically been an extremely segregated city. People of color and African-Americans in particular, have always had to struggle for the opportunity to attend UCLA and have a meaningful presence.

“Most people are unaware of the history of African-Americans at UCLA,” he continued. “The statement #BlackBruinsMatter certainly speaks to the present, but it must also speak to the past as well.

“Indeed, Black Bruins have always mattered. You certainly have a number of prominent Black alums like Arthur Ashe, Jackie Robinson, Ralph Bunche, etc. However, it wasn’t until the late 1960s when you begin to have a significant number of qualified African-American students enrolling at UCLA, who were not athletes, as a result of the High Potential Program,” he added. “Access programs like this were vital and UCLA stood at the forefront of building a diverse student body with African-American representation amongst its UC peer institutions.”

But policy changes, like “the elimination of affirmative action with SP-1 and SP-2 in 1995, and later Proposition 209 in 1996, had a dramatic negative impact on the number of Black students admitted” and “made the campus racial climate more hostile,” said Chad Williams. “Knowing this history is important, especially if we want to understand the reasons why the current racial demographics and attendant climate is so problematic and creates the conditions for incidents like the frat party.”

Aman Williams said that the university has failed to grapple with the decline in Black enrollment and has not instituted policies to remedy the growing disparities on campus.

“Rather than allocating funds toward the increased development of programs to address Black Bruin admission, access and retention, the university created positions such as the new dean of equity, inclusion and diversity,” Aman Williams said. “This is seen by many as a political move to deflect attention away from senior administration, like Chancellor [Gene] Block, from being accountable for the university’s lack of institutional effectiveness.

“Furthermore, added bureaucratic processes have historically denied Black Bruins the efficacy of their agency,” he added. “Thus, the student population at UCLA, a public institution, consistently fails to represent of the demographic it claims to serve,” he added.

“UCLA’s Black students have always been very diverse in terms of class, gender, sexuality, place of origin, etc. Certainly not all Black students involve themselves in campus politics or issues such as this,” said Chad WIlliams. “The relationship between Black athletes and non-athletes has always been complicated, even more so post-1960s. Incidents like this serve as moments for Black students to come together. At the same time, it is important to acknowledge that “Black Bruins” are not and have never have been monolithic. This was one of the most important challenges ― and lessons ― I faced during my time as ASU chair.”

Aman Williams said that recognizing all of these factors and the way they impact his own campus experience motivated him to join the current Afrikan Student Union and fight to effect change on campus.

“I am advocating [for] issues which directly impact my experience and the experience of other Black Bruins,” he said. “While I recognize survival as an active form of resistance to oppression, the way I choose to exercise critical resistance is through reifying Black humanity within the dominant narrative. I believe in community accountability. For me, silence is violence.”

“Simply put, #BlackBruinsMatter much like #BlackLivesMatter, is about an increased awareness of the role White supremacy plays in marginalizing the Black community and taking a stand against it. We say no more. No longer will Black Bruins suffer in silence. We stand together in solidarity,” Aman Williams said.

Chad Williams said, “The university should take active steps to ensure that environments for the expression of racial disrespect do not exist.”