R.I.P.: The Tired Myth of the Apathetic Black Student 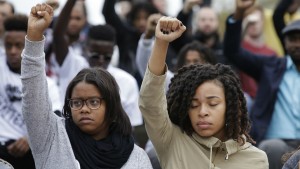 We should all be finally noticing the new — really the old — Black student activism and it’s been a long time coming.

After watching #BlackLivesMatter blossom among American youth, after watching Black student protest after protest — most recently at the University of Missouri and Yale University — literally sweep the nation over the last few years, we should all be finally noticing the new (really the old) Black student activist.

And I am thrilled. It’s been a long time coming.

Over the last three years, I have had the opportunity to travel around the country and talk about my first book and share the story of the Black Campus Movement from 1965 to 1972. During this national social movement, Black students and their allies at upward of a thousand historically Black and White colleges organized, demanded and protested for progressive Black universities, Black studies, Black cultural centers, Black student affairs officers, and Black faculty, staff, coaches and students — you name it students probably demanded it. The Brown v. Board of Education decision did not integrate higher education. It was the Black Campus Movement that integrated higher education.

So, invariably, wherever I go and speak on the Black Campus Movement, the same question is posed during the question and answer period: “Why are Black students so apathetic today?”

It is always a really difficult question for me to answer. For a long time, I was conflicted on the premise. I was conflicted on whether Black students today are indeed apathetic. The bad historian in me kept comparing today’s Black students to their predecessors in the 1960s. The seemingly logical side of me kept comparing the number of protests today to the number of protests in the 1960s.

It is important to learn from the past. Our history is fundamentally our first lesson book. But every good historian will tell you we cannot analyze the past from the vantage point of our own time period. Every great historian will tell you we cannot make serious comparisons of change agents between different time periods. Every time period elicits its own culture. And every culture must be judged from its own cultural standpoint. Every time period — and generation of change agents — must be judged from their own standpoint. Otherwise, the time period and generation being judged usually will be denigrated by the time period and generation doing the judging. In our case, we have constantly judged the Black students of today from the standpoint or purview of the Black students of the 1960s. So of course today’s Black student seems apathetic in comparison.

But our standard of judgment has been wrong all along. The apathetic Black student of the 21st century is a tired myth we need to let rest in peace. We should not be comparing this generation of Black students to the ’60s generation. We should not be looking down upon them as we look up at those elders. When we change the conceptual nature of the premise of Black student apathy from history to the present, we change the question. Let me say that in a different manner. When we stop weighing apathy levels today from the scales of the 1960s, we will stop getting such low apathy weigh-ins from today’s Black students.

Ibram X. Kendi is an assistant professor of African-American history at the University of Florida and the author of The Black Campus Movement. His second book, Stamped from the Beginning: The Definitive History of Racist Ideas in America, will be published by Nation Books in April.