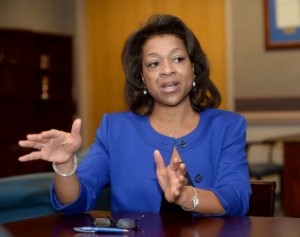 After serving little more than a year on the job, Stacey Franklin Jones abruptly resigned effective December 31 as chancellor of beleaguered Elizabeth City State University on Monday. Thomas Conway, vice chancellor and chief of staff at Fayetteville State University, will serve as interim chancellor and a statement from the University of North Carolina General Administrators indicated its Board of Governors will consider making him the permanent successor at its January meeting.

Jones, who became chancellor of the historically Black university in October 2014, brought experience as an academic leader at Benedict College in South Carolina and Bowie State University in Maryland.

“Together we are embarking on something just shy of phenomenal,” Jones, a mathematician, had said as she accepted the challenge of leading ECSU.

ECSU had suffered a more than 50 percent decline in enrollment over the last five years. With less than 1,900 full- and part-time students now, it had sustained a loss of about $10 million in state funding and tuition proceeds.

State lawmakers had floated proposals of closing ECSU or merging it with other schools but backed off as the result of vigorous opposition to the plans. This year, lawmakers voted to appropriate $3 million to help stabilize the university.