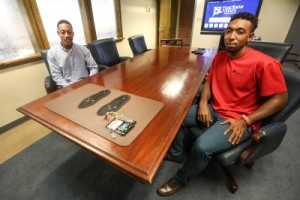 When four Jackson State University engineering students were trying to come up with an idea for their senior project, one of them, Jann Butler, started thinking about his aunt’s loss of her foot three years ago due to diabetes. Butler says her health problems made him aware of the impact of diabetic amputations on entire families and inspired him “to look for a project that would be beneficial to society.” The project team, seniors in JSU’s College of Science, Engineering and Technology, which included two other computer engineering students and one electrical engineering student, researched, planned, designed and finally created an innovative device that could have far-reaching effects.

They developed what the university describes as “a ‘smart mat’ that gauges the foot temperature of diabetics to help thwart the danger of lower extremity amputations—particularly in Mississippi, where the risk is greater, according to the CDC (Centers for Disease Control).”

Jordan Barber, one of the other seniors who worked on the project, said that, for him, the most difficult aspect of the process was the research phase, especially examining all of the products that were on the market to make sure the group wasn’t duplicating something that already existed.

“We were looking for an easy way for patients to see that data and to share that information with their doctor,” Barber explained to Diverse. “We looked at some other studies, and we saw that they used some type of thermometer but the patient had to take the temperature on their own and write the data down and communicate it back to their doctor and we wanted to streamline that.” With the mat, the data were stored and could be shared with the patient and doctor. “One of the things our professor emphasized is that, whatever problem we came up with, something probably already existed [to solve it], so we needed to figure out a way to do it better,” Barber said.

With that in mind, the students decided on the mat (abandoning an earlier idea of “smart slippers” that ran into various design challenges). In addition to the mat, they created a companion Android app to display the data that were being collected.

“We brainstormed and brainstormed,” Butler told Diverse. “That took about two months, then another five months to finish it.” What they came up with was the device that has garnered quite a bit of publicity. Specifically, Butler said, “We developed a mat that diabetic patients could stand on to register the temperature of their feet,” explaining that, if there is a 4-degree difference between two temperatures over a period of time, the lower one would be at greater risk of ulceration.

The other students involved in the creation of the mat, which is still awaiting an official name, were Chevan Baker and Fred Harris, the electrical engineering seniors in the group.

The team worked under the guidance of faculty sponsor Dr. Gordon Skelton, who said in a university news release, “This senior project, and others, aimed to find solutions to real problems.” He explained that, by addressing neuropathy that results in the loss of feeling in the feet, the device could possibly prevent an eventual amputation.

“The idea behind the smart mat was to realistically see if there was some means of collecting data for a doctor or caregiver as an early warning. Products such as these have real value,” Skelton said.

The students say the mat cost slightly less than $500 to produce.

Butler was quick to point out there were several innovative projects developed by his fellow students. “There were other groups that had projects just as good as ours,” he said, mentioning one that particularly impressed him: an automated enrollment system. The university described it as an “automated RFID attendance” system that uses a unique radiofrequency identification tag. It can determine each student’s name, when the person entered the room, whether the student left class early or whether the person was legitimately enrolled for a particular course. Also, it alerts the professor about the frequency of attendance.

Another project was a “wireless pedometer” that can be placed on sports or dress shoes and measures the number of actual “foot strikes” a person makes, producing more accurate counts for users than current products on the market that calculate motion of any kind.

A “smart bag” device also was produced by one of the groups. It can be placed on backpacks or other bags. With RFID circuitry and pressure sensors, users know if an item is missing from a bag based on weight. The device also has Bluetooth technology to alert users leaving a room that an item is missing.

Skelton stressed that the initial prototypes of these types of products validate the concepts of each design but that “refinement and formal adjustments” are needed for eventual commercialization, according to the university’s news release. The university states on its website that team members are engaged in ongoing discussions about modifications and placing the product on the market.