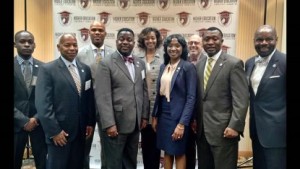 “It is frustrating to feel as if your voice is suppressed by folks who do not know how great these institutions are. You read so much negative research/press in regards to the state of HBCUs, but yet, you know too about the magnificent work that takes place on the HBCU campuses across the nation,” Williams said. “You know first-hand how many students are supported and uplifted by our schools and how many excellent faculty and staff work hard to see students succeed. When you know this information, you know that the story that is being presented is vastly different from what you see on a daily basis.”

Felton agreed. “It pains me that most articles questioning the viability of these great institutions are merely a regurgitation of dated data. If one simply compared the percentages of ‘other colleges’ and their woes [to] HBCUs and their challenges, the national narrative would be different,” he said.

A former Marine, Felton is confident the way to change the narrative is through leadership.

“Leadership and the importance of having sound, principled leaders is taught from the minute you step on the yellow footprints at Marine Corps Recruit Depot Parris Island,” he said. “Given the impending need for leaders, at every level, and our desire to ensure the institutions are strong and viable,” he and Williams thought this was a good place to start in preserving the institutions’ vitality.

While Felton and Williams were zeroing in on cultivating executive leaders like themselves, Miles College President Dr. George T. French Jr. had begun to mentor young and aspiring presidents. After a conversation between the three, Felton and French said they found their visions for nurturing leaders a “natural” and “perfect” fit, and, thus, in March 2015, the Higher Education Leadership Foundation was born.

“It just so happens that the timing is right for the situation and the climate,” said Felton. “We know that there’s going to be …with the retirements and the ebb and flow and the rhythm of life,” there’s a tremendous need to train rising leaders to prepare for a changing of the guard, so to speak, he said.

“Our nation’s HBCUs are in the midst of an evolution,” Williams said, pointing to shorter tenures for HBCU presidents and vice presidents who have retired or have announced their impending retirement.

“Back in the day, you may have had one or two challenges that could have been detrimental, but now there are multiple challenges that are going on that could happen simultaneously, and I think now more than ever we are going to need highly skilled, principled leaders to take us through this period,” said Felton.

French said, “Sometimes it’s just a question of realizing that the cheese has moved and we have to adjust our strategies in leading these institutions and sometimes we just don’t make the adjustments, and we don’t make them sometimes quickly enough and our institutions are not as viable as they could be because we’ve not adjusted to the marketplace, to the economy, to technology, to all of the factors and variables that influence higher education.”

The commitment to advancing the cause of grooming HBCU leaders extends beyond just a desire to do some good in the community and touches on a passion to ensure the continued vitality of the institutions.

“There are few institutions in this nation that were established and exist expressly, although not exclusively, for the education, uplift and development of African-American people,” said Dr. Elfred Anthony Pinkard, who along with Felton, French, Williams, Dr. Derek Greenfield and Gregory Deas comprise the organization’s leadership team.

“What we can’t really [convey] is the relationships and bonds that you can make with like-minded people in higher ed, whether it be a president, senior administrator or director,” Deas said. “There is less focus on title and more focus on lifting one another to do our duty within our HBCUs.”

“Still very young in my career … Having the opportunity to meet leaders who look like me is worth its weight in gold,” he added.

Pinkard, who initially saw himself as more of an outsider adviser via a council of elders as the senior member of the leadership team, said, “There is something deeply fulfilling about using my talents and abilities for and on behalf of my tribe,” he continued. “I was educated at two HBCUs (Morehouse College and Howard University) and have worked as a faculty member and administrator at five HBCUs (Tougaloo College, Paul Quinn College, Spelman College, Dillard University and Johnson C. Smith University). I have seen first-hand the impact of these institutions on the lives of young African-Americans. I have seen evidence of the incredibly innovative work occurring at HBCUs driven by very intelligent and creative faculty and administrators.”

“I have also seen the effect of tyrannical and uninspired leadership and the damage it causes to entire institutional communities. To be a part of something that seeks to empower the young leadership talent that exists at HBCUs while also reimagining what leadership might be at HBCUs is, at once, slightly subversive and fulfilling work,” he said.

Greenfield said it is what the institutions mean to students and those they employ that drives him to work on their behalf. “I love my alma mater,” he said, “but I have noticed that so many HBCU alumni are ‘in love’ with their schools—and it’s that kind of energy and mission that inspires me.”

Pinkard agreed, saying, “In my work at HBCUs, I have met countless young, credentialed, extremely bright and talented academicians who are absolutely committed to HBCUs and are at these institutions by choice. That realization always made me hopeful about the future of HBCUs. H.E.L.F. represents a real and viable opportunity to actually work with these aspiring leaders, which is very exciting.”

Greenfield, who said he enjoyed a great career as a tenured faculty member on the West Coast, said he was one such academician who was driven to teach at an HBCU. “Once I stepped foot on the campus at Saint Augustine’s University, I knew that I had found a ‘home,’” Greenfield added. “So many struggling HBCUs are indeed gold mines with talented faculty/staff and wonderful students, but without dynamic and skilled leaders, they run the risk of merely surviving rather than thriving (or in the case of too many, disappearing altogether).”

The idea that the work they are doing is critical to the very survival of these institutions is one that is shared by many on the H.E.L.F. leadership team.

“I see historically black colleges and universities as being on the endangered species list,” said Williams. “If we don’t protect them, love them, elevate them, rebrand them, and fortify them, they may continue to disappear. The reward will come when more black colleges are saved and are thriving under a continuation of strong leadership.”

Williams called the enhancement of HBCU leadership “a starting point,” adding that the work doesn’t stop there. “We need all kinds of people in all sorts of leadership positions to make HBCUs great. We need people who work for the Department of Education, state Boards of Regents, and System Offices to be affiliated with H.E.L.F. so that they can better understand how to support these schools in the positions that they hold.”

Pointing out that each member of the H.E.L.F. leadership team is moonlighting in their respective roles for the organizations after “put[ting] everything we have into our own institutions” during the day, French said each member is “good at what they do and they’re passionate.”

“Being a leader has its hazards in and of itself, but when you have the nerve, gall and audacity to say ‘not only am I a leader, but I’m going to train you to be a leader,” you subject yourself to a lot of criticism from onlookers, he continued.

So far, the team has been undaunted by the criticisms of naysayers. “H.E.L.F. is helping to spearhead a movement that honors the HBCU tradition while concomitantly challenges these proud institutions to become even greater and more responsive to the needs of today’s students,” Greenfield said.