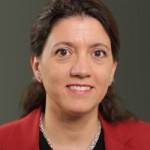 Clemencia Cosentino is co-author of a well-known 2006 evaluation of LSAMP.

NATIONAL HARBOR, Md. — Conference materials referred to it as a “game changer.” The National Science Foundation chief called it a “great return on investment.”

It’s been credited with having produced more than half a million holders of STEM bachelor’s degrees among underrepresented minority students — 509,954 to be exact.

But when it comes to one of the most critical questions concerning the Louis Stokes Alliances for Minority Participation or LSAMP — a congressionally mandated program meant to diversify the STEM workforce — there wasn’t exactly a wealth of answers at the annual LSAMP Research Symposium last week.

Such became apparent during the LSAMP “research and evaluation framework” session at the symposium, which marked 25 years since the program was born.

Asked if it was known to what extent LSAMP graduates had in fact gone on to work in the STEM workforce, Clemencia Cosentino, former director of the Program for Evaluation and Equity Research at the Urban Institute, acknowledged having made efforts to ascertain that information but did not succeed.

“I unfortunately cannot answer that,” Cosentino, co-author of a well-known 2006 evaluation of LSAMP, said when Diverse asked during a Q&A if it was known how many LSAMP graduates went on to STEM jobs.

Cosentino blamed the problem on “the way individual institutions track students down.”

“The problem was institutions are not set up and don’t have the support they need to track the scholars after they graduate,” Cosentino said. “To track the student, that became a huge barrier. What we did with that part of the analysis is we didn’t release it because we didn’t feel comfortable with the findings.”

It’s not that LSAMP — there are currently 45 LSAMP “alliances” throughout the nation that involve approximately 600 two- and four-year colleges and universities — doesn’t have a commendable track record. LSAMP has shown itself to be effective with the first part of what it is designed to do, which is to “increase the numbers of students matriculating into and successfully completing high quality degree programs in science, technology, engineering and mathematics (STEM) disciplines.”

This is achieved through funding for awardees who transform undergraduate STEM education through “innovative, evidence-based recruitment and retention strategies, and relevant educational experiences in support of racial and ethnic groups historically underrepresented in STEM disciplines.”

Cosentino recalled how, when she did her original study of LSAMP a decade ago now, the findings were so surprisingly good that she and her team actually requested a peer analysis — which is more rigorous than a simple peer review — to validate the findings.

In a nutshell, Cosentino and her team found that LSAMP participants took further coursework, pursued graduate degrees and completed graduate degrees at rates that not only outpaced their fellow underrepresented minorities, but at rates that also surpassed the rates at which those things were being done by Whites and Asians, which is a relative rarity at all levels of American education.

“At first we didn’t believe them,” Cosentino said of the findings. “It’s just hard to believe that a program can have this much of an impact.”

But when a company that did a peer analysis came up with the same findings based on the same data — at least up to the second decimal point — “we felt reassured that what we did was good enough and we released it,” Cosentino said.

But that was then and this is now. Twenty-five years is a long time for a federally funded program not to have an answer to the question of whether it in fact did what it was designed to do, which in the case of LSAMP is to diversify the STEM workforce.

James Hicks, director of LSAMP for the National Science Foundation, which administers the $45.6 million program, did not concur with the notion that there is no evidence that LSAMP is making a difference in diversifying America’s STEM workforce.

Hicks provided Diverse with an unreleased “impact report” on the Alabama LSAMP — or ALSAMP — in which a University of Alabama economist and experts “estimate that every dollar coming into ALSAMP generates three dollars and twenty cents for the state.”

“Consequently, by this estimate, over the life of the ALSAMP program, the approximately $37,500,000 coming to the state from NSF has generated $120,000,000,” the impact report states. “These funds have created jobs in Alabama and raised the educational level of its citizens.”

“I’m satisfied that one could extrapolate that same kind of return on investment in other LSAMPS across this nation,” Hicks said in an interview. “The impact on the workforce is simply incredible.”

NSF Director France A. Córdova had similar praise for the LSAMP program as she noted how more than 500,000 participants in the program have gone on to earn STEM bachelor’s degrees. She said LSAMP participants represent a “powerful cadre” of talented young people who are “determined to make their mark on the United States of America.”

“Think of all the talented young people with so much to offer who just need the guidance and encouragement to bring forth the energy and the creativity to benefit the larger STEM community,” Córdova said.

Following in the Footsteps of Legends