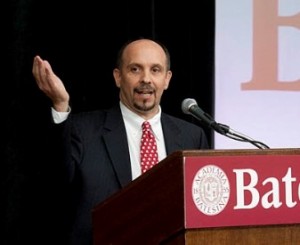 Lumina Foundation President and CEO Jamie P. Merisotis said that, as more employers seek candidates with more postsecondary skills, ??the challenge is that the talent needed to fill those jobs is really in short supply.??

College completion numbers show incremental improvement from last year, according to the annual Lumina Foundation report, “A Stronger Nation.” The report, released on Monday morning, found that 40.4 percent of Americans aged 25 to 64 had either a four- or two-year degree in 2014, an increase from 40.0 percent in 2013.

Lumina is a nonprofit foundation based in Indianapolis with a focus on higher education and a goal that 60 percent of Americans will have a postsecondary degree or credential by 2025. With its $1.3 billion endowment, Lumina has funded a wide variety of college access and completion initiatives.

“We know that the demand for talent is rising, that two-thirds of all jobs being created require some form of postsecondary education,” Lumina President and CEO Jamie P. Merisotis said on Friday afternoon. “With more and more jobs requiring postsecondary skills, we have a challenge, because the challenge is that the talent needed to fill those jobs is really in short supply.”

Merisotis said that the increase in degree holders between 2013 and 2014 shows an “encouraging” upward trend.

For the first time this year, Lumina’s report also included statistics on “high-quality” postsecondary certificates. Lumina’s definition of a high-quality certificate is a credential that leads to further education or employment.

According to NORC Chicago, an independent research institution, 4.9 percent of Americans hold a high-quality certificate. “When we add this 4.9 percent to the degree attainment rate, we have the truest picture of overall postsecondary attainment across the country,” Merisotis said. With the addition of certificate data, 45.3 percent of working-age American adults hold either a degree or certificate.

Despite the addition of certificate data and the small improvement in degree completion, the numbers are not increasing fast enough to realistically meet Lumina’s goal of a national 60 percent degree and certificate completion rate by 2025, Merisotis said.

“Based on our projections, roughly 10.9 million additional credentials, degrees, certificates, or other high-quality credentials are needed to meet the goal,” Merisotis said. “Those need to come from those people who represent our future, particularly low-income Americans, underemployed adults, first-generation students and students of color.”

Breaking down the completion numbers by race and ethnicity shows a more complex picture. Approximately 45 percent of White 25 to 64 year olds hold either a two- or four-year degree. Among African-Americans, the attainment rate is 28.7 percent; 21 percent for Hispanics and Latinos; and 24 percent among Native Americans.

“It is an obvious concern for the opportunities that people from different groups have in this country to have full access to jobs, full access to the middle class, and full economic and social opportunities to advance,” said Dr. Dewayne Matthews, Lumina vice president of strategy development. “Since those opportunities are increasingly dependent on education level, we think there’s good reason to be concerned.”

The nation’s fastest growing demographic group is its Hispanic and Latino population.

A “Stronger Nation” breaks down data by the county level, illuminating areas of educational disparity. “The county-level data shows a very interesting picture. In almost every state you see very wide variations across the state in levels of attainment,” Matthews said. For instance, the suburban counties around Detroit have an overall attainment rate of approximately 60 percent. In some rural counties of Michigan, the attainment rate is 12 percent.

“When you think about their economic future and the future of those communities, it’s a very worrisome one without doing something to really increase the education level of those populations,” said Matthews.

The states with the highest level of postsecondary educational attainment are Massachusetts, Colorado, Connecticut, Minnesota and Washington. Those with the lowest are West Virginia, Nevada, Mississippi, Alabama and Idaho.