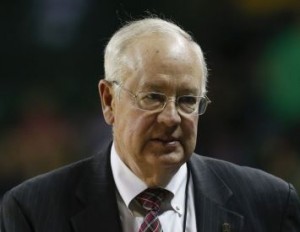 A scathing report as the result of an independent investigation into Baylor University’s handling of student sex assault allegations has led to the ouster of President Kenneth Starr and the suspension of football coach Art Briles with his firing expected to follow.

The university’s Board of Regents said that Starr, whose investigation of President Bill Clinton led to his impeachment in 1998, would become the chancellor and continue to teach in the law school. In addition, the board indicated that other officials in Baylor’s administration and athletic department have been dismissed but have not had their names released.

The investigation and subsequent shakeup follow a series of sexual assault allegations — several involving members of the football team — and complaints by the alleged victims that their claims were met with indifference and sometimes scorn by the university officials.

Two Baylor football players, Tevin Elliott (2014) and Sam Ukwuachu (2015), had been convicted recently of sexual assault in unrelated trials. During the course of those trials, testimony emerged that showed a pattern of failure to properly report or investigate allegations and instances where administrators tried to discourage some complainants from reporting incidents and otherwise following protocol for dealing with sexual assault on campus.

The Pepper Hamilton law firm, which conducted the investigation, found the school’s “student conduct processes were wholly inadequate to consistently provide a prompt and equitable response” and “failed to consistently support complainants,” violations of the U.S. Department of Education’s Office of Civil Rights statute Title IX protection against sexual discrimination.

“We were horrified by the extent of these acts of sexual violence on our campus. This investigation revealed the University’s mishandling of reports in what should have been a supportive, responsive and caring environment for students,” said Richard Willis, chair of the Baylor Board of Regents. “The depth to which these acts occurred shocked and outraged us.

“Our students and their families deserve more, and we have committed our full attention to improving our processes, establishing accountability and ensuring appropriate actions are taken to support former, current and future students.”

The investigators also reported: “There are significant concerns about the tone and culture within Baylor’s football program as it relates to accountability for all forms of student athlete misconduct.”

Baylor’s football program has taken off in recent years, becoming one of the perennial national championship contenders. Briles took over a program in 2008 that had just notched its 11th consecutive losing season. Within five years, they had not only produced a Heisman Trophy-winning quarterback — Robert Griffin III — but had claimed the Big 12 conference title.