When Angelo A. Smith set up a GoFundMe page about a week ago to raise $800 for applications to various physician assistant programs, he doubted that his crowdfunding effort would pay off. 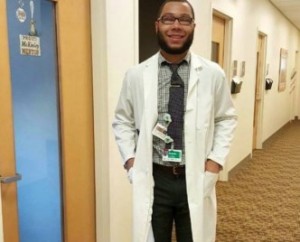 Angelo A. Smith recently graduated with a bachelor’s degree in public health from the University of Toledo

“I was highly skeptical of the help that I would receive,” Smith, who graduated recently with a bachelor’s degree in public health from the University of Toledo, told Diverse.

“When you post about things on Facebook/Instagram, people always seem to verbally support your goals and endeavors,” Smith said. “However, you never really know if that can turn into monetary support.”

But after Smith got his first $25 contribution, his skepticism gave way to hope.

“I instantly began to cry. I was filled with tears of joy,” Smith recalled. “Even a donation so little meant so much to me.”

“I remember receiving a random message on Facebook from a stranger, asking about my campaign,” Smith said. “She’d seen how much I had raised so far and said she would contribute $385 to the campaign.

“She said that she did not mind contributing to a great cause, especially if it would be of assistance with getting a person of color into the medical profession.”

While Smith successfully raised $860 needed to apply to different physician assistant programs, he knows things could have easily gone the other way.

“I was lucky to have raised this amount of money in about three, four days,” Smith said. “It could have very well been no one to contribute to the campaign, and I could have easily been on the outside looking in with this application cycle.”

As college students here in the United States and around the world turn to crowdfunding to finance their higher-education-related expenses, some experts warn others not to harbor high expectations about the method.

“Crowdfunding, except from friends and family, is generally ineffective at raising money to pay for college,” said Mark Kantrowitz, publisher and vice president of strategy at cappex.com, a website designed to help students find colleges, scholarships and majors that suit their interests and strengths.

“There are always exceptions, but those usually involve something unusual and widespread publicity on local or national TV,” said Kantrowitz.

As an example, he cited the recent case of Fred Barley, a homeless Gordon State College student who biked six hours last month just to register for classes and set up a tent on campus until the dorms opened up, only to be told by police he had to break down his makeshift home.

But when the officers learned his story, they took him to a local motel and covered his pay for two days, according to news reports. Then an officer’s wife posted his story on Facebook, and a supporter set up a GoFundMe page that ultimately raised nearly $184,000 for the biology major and aspiring doctor.

“The Fred Barley example was successful in part because the police contributed their own money and asked others to help,” Kantrowitz said. “If Fred Barley had set up the GoFundMe page, it probably would not have been as successful.”

Kantrowitz offered these tips for how to make a crowdfunding campaign more successful:

At the same time, there are no guarantees.

Whereas Kantrowitz and others, such as EdVisors, say crowdfunding works best with family and friends, Smith, the University of Toledo graduate, said no one in his family is in a position to contribute.

“It breaks my heart that my grandmother is 76 years of age and still has to work a full-time job to stay afloat,” Smith said of his grandmother, who is an RN.

“I am the youngest of my siblings and the first and only to have graduated college,” Smith said. “My family is absolutely counting on me and my success.”

As for crowdfunding, Smith said he believes it can be a “great way to raise funds, especially for those who have little support.

“However, in the future, I would rather hope to be more financially stable and prepared to tackle further costs on my own without needing support of others,” Smith said. “I really ran into the issue of needing help from others because I did not necessarily do my part with saving and preparing for the steep costs.”

As an African-American who attended schools in the inner city of Detroit, Smith said he sees himself contributing diversity within the medical profession and plans to give back.

“Not very often do you find students from the inner city seeking careers in STEMM or seeking to obtain positions of prestige and power,” Smith said, using STEMM—similar to the more popular STEM—as an acronym for Science, Technology, Engineering, Mathematics, and Medicine.

He said he also hopes one day to work as a medical practitioner for the University of Michigan, start a scholarship foundation for students who are interested in the medical profession, and possibly start a Black-owned clinic or small hospital system.