Dr. Jason Johnson — a frequent commentator on cable news — has accepted a tenured professorship in the School of Global Journalism & Communication at Morgan State University (MSU), the Black college located in Baltimore. 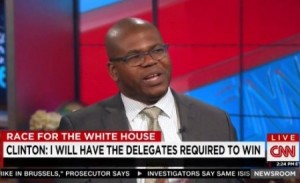 Johnson’s hiring arguably positions MSU to be the leader among HBCUs in the field of journalism. The School of Global Journalism & Communication is headed by veteran journalist DeWayne Wickham and its faculty includes well-known journalists such as Jackie Jones and E.R. Shipp, who won the Pulitzer Prize for Commentary in 1996 for her columns in The New York Daily News.

Last year, MSU hired Dr. Stacey Patton, an award-winning author and high-profile journalist, to teach multimedia journalism and to edit the Morgan Global Journalism Review — one of three major university-based publications of its kind in the United States.

Johnson, a trained political scientist who often appears on CNN and is also the political editor of The Root website, will teach courses focused on political and international journalism.

As the presidential election draws nearer, students in Johnson’s classes will examine how political campaigns are covered.

Johnson, who previously taught at Hiram College, a small liberal arts school near Cleveland, said that he always wanted to teach at a historically Black college or university (HBCU).

“I wanted to be in a position to share my knowledge with African-American students,” Johnson said in an interview with Diverse. “I consider my students to be my trainers. A lot of what I talk about on the air is what I developed in class. Being in the classroom makes me great on television.”

At a time when many other colleges and universities are drastically slashing their journalism programs, MSU is expanding and integrating social media and technology into its instructional curriculum.

Johnson’s regular television appearances will undoubtedly bring free publicity to MSU, as networks also broadcast that he is an instructor at the HBCU.

“I absolutely love it,” said Johnson, of his on-air appearances. “I see it an extension of my teaching.”

Johnson called MSU’s journalism program “dynamic and innovative” and said that his first love is teaching.

But as a scholar who is deeply fascinated with politics, he said that, unlike others, he has not been surprised by Donald Trump’s meteoric rise.

“For the last seven years of my life I’ve lived outside of the D.C. bubble,” he said. “I got to see the campaign commercials and how people view politics outside of D.C. I have an outsider perspective.”

HBCUs, Advocates Looking for Help from Trump on Funding