While still maintaining high standards and stellar graduation rates, some HBCUs have created programs that allow promising students who may not meet the traditional requirements to enter and flourish.

In the spring of 2015, Dr. Edison Jackson, president of Bethune-Cookman University in Daytona Beach, Florida, saw a story on CNN focused on three 17-year-old high school students in Baltimore who spoke about their desire to move beyond their surroundings and achieve something in life. 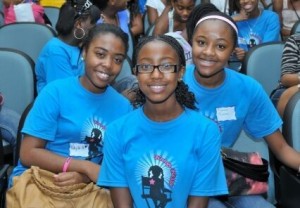 Spelman College offers opportunities for girls during the summer to introduce them to the school’s academic rigor. (Photo courtesy of Spelman College)

Jackson offered the three students admission to Bethune-Cookman and assured them that, whatever costs were not covered by grants, the university would pick up.

“These young men have potential, but not opportunity,” Jackson told CNN. “I saw promise.”

Terry Brown and Kyrique Jones have completed their freshman year. It wasn’t easy and they definitely experienced challenges adjusting to their new environment, but they’re looking forward to returning in the fall, when they’ll be joined by Jamel Phillips, according to the university.

Not all admissions are that fortuitous, but there is a growing sense of purpose in creating learning opportunities that enable HBCUs to offer entry to students who may not meet the traditional admissions requirements but who show great promise.

“Any young man that we touch and can help to become successful is one less young man who becomes a statistic,” says Jackson.

Spelman College in Atlanta tops all HBCUs, according to a recent report published by U.S. News & World Report. At 67 percent, it had the highest four-year graduation rate among the 54 ranked HBCUs that submitted data.

It goes without saying that the students who apply to this world-renowned women’s college have high aspirations. Ambitious young girls attend the summer College Prep Institute.

So, is there a place for highly aspirational young women who may not have the best SAT scores or grade point averages?

Tiffany Nelson, director of admissions, says there definitely is.

“We take into consideration their community service, their engagement and their leadership,” says Nelson. “What we look for are students who have certainly done very well academically; however, there may be some opportunity for growth, if you will. While they may not be as competitive right out for admission, there’s certainly something about them, about their applications, that we feel would be very beneficial for both the student and Spelman.”

Nelson says the counseling staff  reviews the applications and identifies students with “something” that makes them stand out — either they were leaders at their high schools or they started some sort of community organization. Their drive, persistence and leadership — key characteristics of Spelman women — make them good candidates, say Spelman administrators.

In August 2015, Fayetteville State University in Fayetteville, North Carolina, launched its Bronco STAR (Supporting Transition, Access and Retention) program, which is designed to increase access and decrease barriers to a college education for students who learn differently. It serves 40 students per year with direct student support, including academic coaching, support workshops and supervised study.

“We are increasing our reach to middle and high school students in an effort to encourage them to embrace their learning differences,” says Andrea Neal, director of special programs at Fayetteville State. “We also want them to know that Fayetteville State is a great option because we have these programs and resources to enable them to move forward with their college aspirations.”

Those potential Spelman students to whom Nelson refers are invited to participate in the Pre-Enrollment Summer Program (PEP), which has been offered since 2013. Of the 64 students who participated in its first three years, 63 successfully navigated the program and became fully enrolled students. After one year at another college, the 64th was admitted as a transfer student to start this fall.

Twenty-seven students participated in this year’s six-week program that ran from June 12 to July 23. Each took two four-credit-hour courses, one in political science and one in English.

Those who successfully completed the program were fully admitted and joined the rest of the incoming students last week at new student orientation.

“In the English course, we ordered three different books for the students to review and they have to write various reviews regarding the subject matter. As a result, the faculty person that’s managing the class will take a hard look at the writing style or skill set — grammar, punctuation, context and things like that — as she’s reviewing these writing samples. It gives students the opportunity to receive early critique regarding what’s expected at the college level,” says Keith Webb, director of cooperative education and special programs at Spelman.

Webb says students get a clear picture of what will be expected of them as Spelman students.

Similarly identified students at Morehouse College, the men’s HBCU in Atlanta, also among the top 10 in graduation rates, participate in its Pre-Freshman Summer Enrichment Program. The six-week college readiness program is designed to prepare students for the rigors they will face when college begins.

Each student is placed in two courses based on areas in which they need support, including subjects such as college algebra and English composition, and is eligible for six college credits if they earn a final grade of C or higher. Students also receive information about the college experience.

Bethune-Cookman, also in the top 10 HBCUs in four-year graduation rates, offers the Summer Scholars Bridge Program (BP), a conditional admission program for students who don’t meet the required GPA and test scores. The potential to succeed has been assessed during the application process, in which background factors and demonstration of willingness to succeed are considered.

BP students take seven credit hours of courses during a five-week summer program. Their courses are based on their test results and areas of need. Those who successfully complete their course work enter the freshman class.

“Dr. Mary McLeod Bethune [the university’s founder] wanted to give Black children an opportunity to learn and thrive. She knew that it wouldn’t be an easy task, but she was up for the challenge,” says Warren Heusner, associate vice president for enrollment management. “Bethune-Cookman was a place of opened arms for those who desired to do great things — they just needed a chance.”

Neal says the beautiful thing about Bronco STAR at Fayetteville State is that students self-identify and, by doing so, reveal their deep desire to excel.

“The Bronco STAR program relies heavily on instructor referrals and advertises services to all students, not just students with identified learning differences,” says Neal. “FSU has a large nontraditional and veteran population and some of these students need support with challenges like posttraumatic stress disorder and traumatic brain injury. Bronco STAR was overwhelmingly successful in recruiting our first year, mainly through word of mouth.”

“Bronco STAR helps to target another population of individuals that often feel postsecondary education is out of their reach,” Neal says. “FSU creates an environment that promotes learning for all people and Bronco STAR will continue to perpetuate this objective through our commitment to ensuring students and those supporting students are properly equipped with the knowledge and resources to help all students succeed.”

For Spelman students in need of academic support during the school year, there is the Center for Academic Planning and Success, where students may avail themselves of tutoring — both one-on-one from peers as well as group tutoring — additional supplemental instruction, specialized academic counseling, and seminars about how students can more effectively pursue and achieve success.

There is also the campuswide attitude, say Spelman administrators, that, despite the highly driven competitive nature that pervades the student body, students must look out for and help each other.

“Sisterhood is something that is expounded,” says Webb. “From 1881 to where we are right now, it’s always been about the collective approach. … There’s this great sense of collectivism and sisterhood that exists on this campus and is constantly reinforced.”

Students With Disabilities: We Want Our Fair Chance at College

When It Comes to Health, Environment Remains a Major Factor

Leading the Way on Diversity