After reading the proposed Mexican American Heritage textbook for Texas students last week by Jaime Riddle and Valarie Angle, I can without hesitation state that it is obscene and extremely offensive. And beyond being unfocused, incoherent and a badly written book, it is also an intentional assault by non-experts and ideologues against the spirit and psyche of Mexican American students. 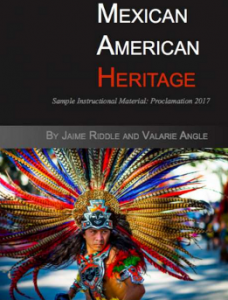 The truth is, I now feel dirty and in need of a “limpia” or a “cleansing.” It is that bad. It is actually not even a textbook, but rather, an anti-Mexican, anti-Mexican-American, anti-Black and an anti-Indigenous ideological screed.

It is also a very familiar narrative that has been employed by the state in the decade-long battle over Ethnic Studies in Arizona, a battle that should culminate with a Tucson trial in early 2017, focusing on whether the state’s 2010 anti-Ethnic Studies bill was racially motivated or not (Yes!). The book actually reads like the “clash of civilizations” narrative that former Arizona State Education Secretary Tom Horne has peddled throughout all these years.

Akin to Horne, the authors have conjured up a narrative that corresponds to their “Americanization” ideology; one that sees Mexican Americans at best, as “illegals” and as coming from violent and backward cultures and as peoples that continue to be in the way of Manifest Destiny and also their City on a Hill. Nowhere in this 500-page poorly researched book is there anything remotely positive about the rich culture and history of Mexican Americans. Their only salvation: full assimilation.

The final report of the Ruben Cortez Ad hoc Committee, presented to the Texas State Board of Education at their Sept. 6 meeting states: “the proposed textbook is really a polemic attempting to masquerade as a textbook.”

It found the book to be riddled with at least 140 factual and interpretive errors, plus errors of omission. Beyond this, Riddle and Angle actually make Mexican Americans tangential in their own story as they inject irrelevant and countless anti-communist diatribes into their book. As the Responsible Ethnic Studies Textbook (REST) Coalition observed: “The text mostly addresses U.S., Latin American and world history and fails to connect the relevance of these broader fields to Mexican American history.”

Ironically, while University of Texas at Austin professor, Emilio Zamora, a member of the ad hoc committee, conveyed that the authors will use this report to “fix” the book, though no one actually believes it is fixable because the problem is the flawed narrative itself.

From start to finish, the authors argue that America is part of a great civilization, in effect, guided by God, that has given the world democracy, capitalism and freedoms and that Mexican Americans are part of another tradition or culture [Indigenous], rooted in primitive socialistic or communistic societies that committed mass sacrifices, cannibalism and engaged in constant warfare. This despite the fact that a recent study by James Demeo conclusively has shown that “Old World” cultures were dramatically much more violent than “New World” cultures (Unlearning the Language of Conquest, Jacobs,139). This also while the authors minimize and serve as apologists for genocide, land theft, slavery, lynchings and Jim Crow segregation in their book.

They further argue that from the onset of Spanish colonialism until the present, Mexican Americans have only known military strongmen, communist regimes and revolutionaries. This is what has caused a constant migration into the United States (p301), perpetually causing a tear into the nation’s social fabric, also preventing them from fully accepting this nation’s “superior” values.

Mexican Americans are justifiably angry about this book, and yet, American Indians should be doubly angry. The book peddles foundational myths going back 524 years that posit that Indigenous peoples ― relatives and ancestors of Mexican Americans ― were ungodly violent savages that roamed an untamed wilderness, always a threat to civilization. Only because the Spanish intervened (colonialism) did native peoples finally get a chance to prosper and partake in the benefits of Western Civilization. But even the Spanish knew nothing of democratic ideals.

The narrative they weave is a thousands-of-years-old conflict, often religious, pitting Western Civilization vs everyone else, except in this case, specifically Indigenous peoples/Mexican Americans.

Keep in mind that approximately 50% of all K-12 students in Texas are Mexican American and this book, not a Mexican American class, is the state’s response to meet their needs. A decision by the state board regarding the possible adoption of this book is expected at their next meeting in November.

I think I need that limpia now.

For information regarding this textbook issue, please go to the REST Coalition’s site at: http://masfortexas.org/

Dr. Roberto Rodriguez is an associate professor in Mexican American Studies at the University of Arizona. He is the author of the recent: Our Sacred Maíz is our Mother. He can be reached at: XColumn@gmail.com

Board Members Delay Decision on Future of Antioch College

Teachable Moments: For Colleges, the Future of Coaching is Now