Growing up as an Army brat raised by first-generation immigrants, Lily Eskelsen García’s road to higher education was nontraditional. For her parents, neither of whom attended college, seeing their six children graduate high school “was a very big deal,” says García, president of the National Education Association. 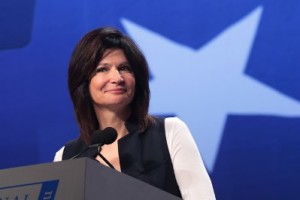 Lily Eskelsen García is the president of the National Education Association.

But as García began a career in elementary education, she learned the importance of obtaining a college degree and receiving a postsecondary education. Today, as she leads the nation’s largest labor union, García dedicates her time to ensuring that others have the same opportunities. “It’s what I have for breakfast,” she quips.

After graduating high school in Utah, García searched for a job that allowed her to work with children. The first available position was a lunch lady in a head start program. She then transitioned to a teacher’s aide.

It was a kindergarten teacher who advised García to attend college for her teaching credentials. At the time, she was almost 20 years old, married and the mother of a six month-old baby.

Being a nontraditional student at the University of Utah meant that she was “laser-focused” on her education, García says. Taking double classes, she told herself that she had to finish her degree in four years “because that is what’s ticking on your student loans.”

In 1980, she achieved her goal and received an undergraduate degree in elementary education.

She then decided to pursue a master’s in instructional technology because “there were these new things called desktop computers,” she says, recalling a time before cell phones were commonplace. Equipped with an Atari 800 and a joystick, García sought to merge technology with teaching in a meaningful way.

Thus, her final project showed how word processors could enhance language arts experiences for children. García received a master’s degree in 1985, and spent the next several years educating students with disadvantages such as living in foster homes and battling mental illnesses.

In 1989, she was awarded Utah Teacher of the Year, which gave her a platform beyond the classroom. This was during “a tumultuous year” for the school’s education system, she says. There were no pay increases for teachers amid a rise in student populations.

“As the teacher of the year, I was pretty outspoken about having 39 kids in my class and being told to personalize education with them,” she says.

After spending the year speaking to press and calling out politicians, her colleagues encouraged her to run for elected office.

“And there happened to be an opening with the Utah Education Association,” where she became president in her first elected role, she says.

In 1998, she ran for U.S. Congress. While unsuccessful, she became the first Hispanic to run for Congress in Utah on the Democratic ticket, earning 45 percent of the vote against the incumbent. Currently, she’s making history as the first Latina president of the NEA, something that she says she doesn’t take lightly.

“I think when you’re an educator, you bring everything that’s in you to your work,” she says. In her role as an education advocate, García meets young DREAMers who share with her their fears of family members being deported.

When she tells her own story, she says, one that’s often very similar, “they know [I’m] not judging them.”

García is fueled by these children, as well as those whom she spent years nurturing as a teacher. They are “what I get up and fight for every morning,” she says. “I realize that the one thing in their lives that would lead them to something better is their education.”

In terms of higher education, one of her battles centers on student loan debt, she says, referencing the NEA’s Degrees Not Debt campaign, which highlights “the incredible situation that our country is in right now.”

After graduating from the University of Utah, she owed approximately $6,000 in loans, with a 3 percent interest rate, she recalls.

She was given 10 years to pay it off at about $50 per month. In other words, she says, it’s not even close to the “crushing debt” that plagues today’s college graduates.

“There’s something wrong when our kids graduate [from high school], and maybe even graduate with honors, and are not sure that they should go to college [because of money] — that’s something we’ve got to fix.”

She’s also concerned about the financial stability of staffers in higher education. At some of America’s public colleges, even educators “with ‘doctor’ in front of their names” aren’t making living wages, she says.

Instead, many adjunct professors are living “paycheck to paycheck, sometimes not knowing if they’re going to have a contract the next year.” The decision is dependent upon the ability for students to fill classes — something the professors are told “at the last minute.”

With challenges, come successes — and García is grateful for making differences, whether they’ve come after speaking with kindergarten students or the president of the United States. With each encounter, she says that she uses the skills that made her a good teacher, advocate and activist.

As she says, “It’s all about inspiring, encouraging, communicating and informing.

University of Utah President Dr. Ruth Watkins to Step Down and Will Lead Strada Impact