A number of inconvenient truths beset the U.S. international standing in educational attainment. The U.S. currently ranks 11th out of 34 developed countries in college degree attainment according to the OECD. Although the U.S. was the first nation to offer universal high school to all students, American students have since fallen woefully behind their peers in China, Korea and Canada in math. 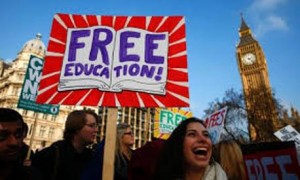 None of these statistics are breaking news. Yet as troubling as they may be, they have yet to spur a whole-hearted reaction from policy makers and legislators, Dr. Maria Tienda said at the American Educational Research Association (AERA) Brown lecture last week. The Brown lecture is an annual, highly-regarded scholarly talk on inequality in education that has been held in Washington, D.C., for the past 13 years.

In Thursday’s lecture, Tienda referred to a 2013 Atlantic article by Stephen Lurie, which argued that the countries surpassing the U.S. in global education rankings have one common characteristic. As Tienda put it on Thursday night, they “all either have a statutory guarantee to a free education or an independent statute guaranteeing education as a basic right.” By contrast, in the U.S. the right to an education is housed in the individual constitutions of the 50 states, according to the 10th amendment.

For his 2013 analysis, Lurie used “The Learning Curve,” an international assessment of schools produced by the publishing company Pearson. The Learning Curve put the U.S. at 17th in 2012, which was the most recent available data when Lurie wrote the Atlantic article, and 14th out of 40 countries in 2014.

As the U.S. falls behind in the international rankings, public education has also become increasingly unequal and weighted in favor of wealthier students and school districts. Today, one in six students attends a public school that is highly racially segregated and underresourced, despite sustained efforts to desegregate school systems after Brown v. Board of Education was passed in 1954.

In a blow for economic equality, family income has become an indicator of academic success. The achievement gaps in standardized testing between students from the 10th and 90th percentages of the income distribution grew by nearly 40 percent since 1970.

“The nation’s slippage on the international arena coupled with rising school segregation is deeply rooted in the system of local control, which has been difficult to square with the philosophical goal of equal opportunity,” Tienda said.

To underscore the disparity in opportunity and investment among the 50 states, Tienda pointed to uneven levels of financial investment per student at the state level. Although higher spending does not always correlate with better results—the U.S. ranks high in terms of its investment in education compared to other industrialized nations but still underperforms many of them—it does matter in terms of resources, particularly since there is often great variability in funding on a district-by-district basis.

Utah, with the lowest per-pupil spending, spent $5,546 per student in 2012, whereas New York, with the highest, spent $18,097 per student. Funding levels can vary drastically district by district within states, Tienda added, so even the states that make a relatively large investment in their students could be overlooking some students in favor of others.

Federal initiatives, such as the Morrill Acts of 1862 and 1890, the National Defense Education Act (NDEA) of 1958, and the Education and Secondary Education Act  (ESEA) of 1965, led to historic gains in educational opportunity, Tienda said. Yet none of these initiatives, as sweeping and transformative as they may be in their own right, made education a universal right.

Moreover, there has been a slow retrenchment in these sorts of widespread investments since the 1970s, hastened and slowed during economic booms and busts. The erosion of state support for higher education makes the slow slide backward all too clear. In the 1990s, state appropriations made up 37 percent of all funding sources for public, four-year institutions, whereas, in 2010, state appropriations made up only 20 percent.

Although it is unlikely that states will be forced to give up control given the current political context, Tienda said, “it is reasonable to set standards of public education funding and academic quality below which no school should fall, irrespective of the state in which it is located or the social background of students served.”

Tienda argued that today’s disparities in education call for the reformulating of the social contract, which is currently weighted heavily in favor of older generations at the expense of the young. Senior citizens receive a fair greater percentage of the federal budget than do children, she said, noting that, in 2015, 45 percent of the federal budget went to entitlement programs for seniors and less than 10 percent for children.

Yet paradoxically, Medicare and Social Security recipients only stand to benefit from well-educated young people who can get high-paying jobs, since they will be the ones expected to pay into those funds, Tienda said.

“Restoring the United States to educational pre-eminence is more than a lofty social goal. It is mission critical to sustain the nation’s economic competitiveness in a highly globalized world, particularly as the outsized Baby Boomer cohorts retire,” she said.

Former labor secretary to join Brandeis – Robert B. Reich for post of professor at Brandeis University