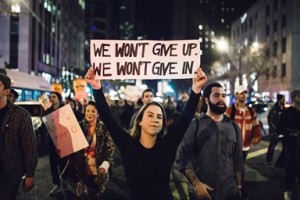 Thousands of protesters take to the streets of Chicago, Illinois, USA, on November 9, 2016 after Donald Trump was elected president of the United States. (Photo from Sipa via AP Images)

A passionate crowd of all colors, sizes and creeds chanted and held signs in downtown Chicago, mobilizing against the polarizing presidential-elect in an event organized by ANSWER Chicago, an anti-war, anti-poverty group. LGBT individuals, Latinos, African-Americans, socialists, feminists, and more gathered in unity, many of whom were students, angered by Trump’s message.

“I don’t want someone as hateful as Trump to be the president,” said School of the Art Institute of Chicago student Michelle Jeon, 18, who said she could not vote due to personal matters. “This is the worst decision America has ever made. I thought it was a joke when he first ran for president, but now he is about to be president and it’s not funny anymore.”

Largely mobilized through social media and billed as an “emergency” following Election Day, the crowds walked peacefully but loudly from Trump Tower through the city, winning support from some motorists and passersby and anger from others. With cell phones and fists aloft, chants included “Hey, Hey, Ho, Ho, Donald Trump has got to go” and “Whose streets? Our streets.” Other chants and signs were far angrier and more profane, mostly referring to Trump’s past comments.

Students were actively involved and in attendance in Chicago. For some, 2016 was their first election, with unsatisfactory results.

“I’m really pissed off,” said Caroline Klose, 18, a student at DePaul University, who said she was a rape survivor.

“I hope it changes, I hope something changes. I hope this brings awareness,” Klose said, referring to the rally.

Grant Gibson, another DePaul student, said he came because of the experience. “It’s a protest against a wrongful man being president. Something in me told me I had to come out tonight.”

“I feel like the turnout is much bigger than I thought it would be,” said Gibson.

Julia Obasi, 21, a student at USC, summed up much of the anger and sadness surrounding the protest. “I think it’s unfair to the people. I don’t think he cares about the people. I think students, primarily, will be the ones affected,” said Obasi, who said she voted for Hillary Clinton.

Obasi added that the 70-year-old president-elect was not representative of America’s young people. “I think he is totally against representing youth. I don’t think there’s any happiness in people voting for Trump. I think most of the people that voted for him was out of spite.”