Carrie Billy, a member of the Navajo Nation, spent most of her early years living on two Native American reservations in Arizona.  From kindergarten through high school, though, she never once had a Native teacher. 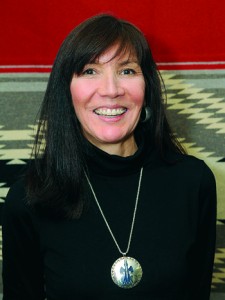 “I don’t think it occurred to us that American Indians could be teachers because we never saw one — we could be the janitors [or] teacher’s aides,” recalls Billy, president and CEO of the American Indian Higher Education Consortium (AIHEC). “In looking back at it now … that’s a really sad way to grow up.”

But AIHEC represents 37 tribal colleges, which are working to change that, Billy says.

“They’re trying to make sure that young American Indian or Alaskan Native kids have people who look like them in the classroom — that, to me, is a big change for the better.”

But in the communities where Billy grew up, severe poverty and alcoholism were prevalent. This meant that college wasn’t a priority for some youth.

Fortunately, Billy had a role model in her mother, one of several adults in her life who attended college. In addition, Billy also pulled from internal strengths. “I think, for some reason, I am one of those people who’s just more optimistic — I don’t automatically think that something can’t be done. I think that it can be done; we just have to plod along until we do it.”

When she entered the University of Arizona, Billy had aspirations of becoming a sports journalist. However, nearing the end of her undergraduate schooling, she had a change of heart.

“I just always felt like there was something more that I could do or that I should do, especially for Navajo [and Native American] people,” she says.

Thus, she turned to a career in law.

After graduating from Arizona in 1983, she moved on to the Georgetown University Law Center. In the nation’s capital, “politics are just part of the daily life,” she says, recalling volunteering for several political campaigns as a student.

With the program’s public service focus, she also spent time teaching street law to high school students who didn’t always have favorable impressions of the legal system. “So to explain how the law works and how to work through it, you can really have a lasting impact on people’s lives,” she says. Billy graduated from Georgetown in 1986, with “a sense that [I] can really make a difference in the world.”

While serving as a senior staff member to U.S. Sen. Jeff Bingaman, Billy was afforded her first opportunity to work with tribal colleges. Among her many contributions, she helped establish a bill to secure ongoing support for the Institute of American Indian Arts, the country’s only college that’s dedicated to promoting Native American art.

In addition, Billy helped to pass legislation designating tribal colleges land-grant institutions, which gave them opportunities to make advancements in agriculture, land use, and community development.

One of her greatest accomplishments that she says often goes overlooked came in 1998 when Bingaman’s office drafted and championed legislation that led to the establishment of the Hispanic-serving institution designation.

“People just kind of think that Hispanic-serving institutions have been around forever — they have been — but that support and extra help that they needed hasn’t always been there,” Billy says. “So when I look back at that, I think that was really significant.”

That same year, Billy was appointed by President Clinton to serve as the first executive director of the White House Initiative of Tribal Colleges and Universities. In this role, she continued to create pathways for Native students by improving the capacity of tribal colleges by partnering with federal and private agencies.

Almost a decade later, Billy entered her current role as executive director of AIHEC. One of her first achievements in this capacity came when President Obama provided forward funding of $50 million to tribal colleges. “So now when Congress doesn’t get the appropriation bills finished, their academic years aren’t threatened,” she explains. “They’re able to start classes in August and they actually can budget for it and have the funding that they need to start on time.”

This was a lofty goal for the organization, she continues. “Even our strongest supporters in the Senate said for years, ‘Oh that’s impossible, we can’t do it,’ but we were able to get that done,” she says.

AIHEC has also helped to successfully expand Title III programming, which “has allowed tribal colleges to restore facilities so that students have nice places to go to school —  where the roofs aren’t leaking and there aren’t exposed wires,” among other things, Billy says.

In addition, the organization created the Indigenous Evaluation Framework, “a way to evaluate and to measure our programs in a way that’s relevant to us based on our tribal culture, values and spirituality.”

Throughout her career, Billy has made strides because of her personal strengths as an advocate. In addition, places like AIHEC have moving stories to tell, she says. “If you are really changing families, communities, and nations, I think it’s easy to get people behind us.”

Arne Duncan’s Profile: What He’s Done and Where He’s Been