We will see if free college tuition for the middle class, or student loan relief, all higher ed issues brought up by Hillary Clinton and Bernie Sanders, are even remembered by President-elect Donald Trump in the coming months.

Trump made passing mention to vague ideas of helping students out of debt during the GOP convention, mostly to counter Clinton. But like everything on the Trump agenda from the wall to banning Muslims, no one knows how Trump will go from sloganeering to real action. 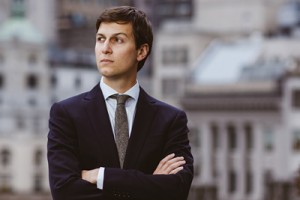 Since the election, I’ve mentioned somewhat satirically that our political circumstance of having the least experienced, least qualified person elected to the presidency was a grand example of affirmative action—for Whites.

It brings to the forefront an issue that was never really addressed in the campaign but is always lurking as a concern in higher ed.

Despite the Supreme Court weighing in on the Texas case, affirmative action remains a conservative rallying call, and, with a pending case on fair admissions at Harvard, it could become a more contentious issue again.

Coincidentally, it comes up during the Trump transition as the name of Trump son-in-law Jared Kushner, 35, husband of Ivanka Trump, pops up in the headlines as one of Trump’s consiglieres.

Award-winning journalist Daniel Golden, the editor of ProPublica, an independent nonprofit investigative news organization, is also the author of the 2006 book “The Price of Admission.”

Last week in the British newspaper The Guardian Golden highlighted a nugget from his book that Trump’s son-in-law was accepted into Harvard after a $2.5 million pledge made by Kushner’s parents.

Golden wrote that his book “exposed a grubby secret of American higher education: that the rich buy their underachieving children’s way into elite universities with massive, tax-deductible donations. It reported that New Jersey real estate developer Charles Kushner had pledged $2.5 million to Harvard University not long before his son Jared was admitted to the prestigious Ivy League school, which at the time accepted about one of every nine applicants. (Nowawdays, it only takes one out of 20.)”

Golden quoted high school administrators who said Kushner’s acceptance was not warranted by grades or SAT scores. A spokesman of the Kushner Companies responded by saying that tying the gift of Charles Kushner to Jared’s admission was false.

But Golden did other research that showed how Harvard wooed more than 400 top donors and how they were recruited to be on fund-raising committees. Golden noticed that, unlike most of the committee members, Kushner was not an alumnus but had graduated from New York University.

“This eliminated the sentimental tug of the alma mater,” wrote Golden. “Leaving another likely explanation: his children. Sure enough, his sons, Jared and Joshua, had both enrolled there.”

It was a trend Golden found as he went through the list. In last week’s Guardian, Golden writes: “Of the 400-plus tycoons on Harvard’s list—which included people who were childless or too young to have college-age offspring—more than half had sent at least one child to the university.”

Charles Kushner, by the way, has made news in other ways. Subsequent to Jared’s graduation, the elder Kushner pleaded guilty in 2004 to tax violations, illegal campaign donations, and retaliating against a witness. He was sentenced to two years in federal prison. The prosecutor just happened to be Chris Christie, who recently was dumped as head of Trump’s transition team.

But that’s just an aside. The Kushners’ real worth is to show America how admissions really work in higher ed.

And it gives a clear view of what the president-elect thinks of meritocracy.

Trump prefers affirmative action, but in the way wealthy Whites like it.

Just look at his transition team and its appointees.

Diversity is not a word that applies.

Emil Guillermo is journalist and commentator on race, society, and politics.  He writes a column at http://www.aaldef.org/blog