Beverly Walker-Griffea switched on the television on one of her first days as the new president of Mott Community College in Flint, Michigan, to news reports of brown water flooding from hydrants in the city. The date was August 2014, still many months away from when Flint would make the national news for lead poisoning as a result of corrosives in the water. 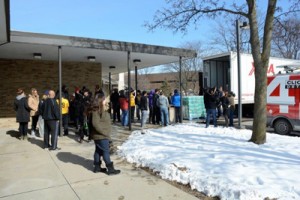 Walker-Griffea had just moved from a position at Montgomery College, a Maryland community college with satellite campuses on the outskirts of the Beltway. Washington, D.C., had gone through a water crisis of its own in the early 2000s, when lead leached from aging pipes into the water supply.

She was taking on leadership of Mott Community College (MCC), a community college serving the greater Flint, Michigan, and Genesee County community, thousands of miles distant from the District and its former water problems. As Walker-Griffea watched the news, newscasters explained that the brown water was the result of flushing efforts to move stagnant water out of unused pipes. At the time, the explanation appeared to be a logical one, Walker-Griffea tells Diverse.

As MCC president, Walker-Griffea joined the board of the Greater Flint Health Coalition, a nonprofit dedicated to addressing health issues in Genesee County. At one of the first meetings she participated in, the group discussed local water discoloration.

The explanation that water was laying stagnant in underpopulated parts of the city made sense, given the dramatic decline from a population of about 200,000 at its peak in the 1960s.

In 2014, Flint’s population had dropped to less than 100,000, a dramatic change from its former status as a large industrial town with tens of thousands of jobs available at corporations like General Motors. As plants closed and the jobs moved out of town, residents followed suit, along with many of the city’s young people.

Today, Flint is a majority Black city in which almost half of residents live in poverty.

While city residents began pushing for better answers, disturbed by the taste, color and smell of the water, they had no reason to mistrust what city officials were saying. “Of course, as a newcomer listening to city officials, I trusted that what they said was true,” Walker-Griffea says. Yet, as Flint and the nation were soon to learn, Flint’s water troubles were just beginning in 2014.

In the midst of the water crisis in Flint, Michigan, last year, higher ed institutions in the area are a safe haven for the students and community.

Daily life is governed by certain assumptions: that drinking water is clean, highways can take us anywhere we want to go, and bridges are safe. Yet much of the infrastructure in the United States was put in place long ago and is now in urgent need of restoration.

The American Society of Civil Engineers (ASCE) puts out an Infrastructure Report Card for the nation every four years. According to the most recent report in 2013, the United States is approaching a moment when repairs to pipes and mains will be all the more critical.

As the report summary puts it, “At the dawn of the 21st century, much of our drinking water infrastructure is nearing the end of its useful life.”

The implications for public health are enormous, as the disaster that overtook the city of Flint illustrates.

It should be remembered that Flint is just one municipality among thousands. An estimated more than one million miles of water mains lie beneath U.S. soil. ASCE warns that many of those pipes and water mains are more than 100 years old, built before the dangers of lead were fully understood.

Flint’s problems began when a state-appointed emergency manager switched the Flint water supply from Detroit water to the Flint River in 2014 to save money. Taking water from the Flint River was supposed to be a temporary measure until the city could connect its pipes to a less expensive provider. All in all, the switch expected to save the region $200 million over 25 years.

But Flint River water proved to be problematic from the start.

First there was an E. coli bacteria outbreak, prompting advisories to residents to boil their drinking water. Next, the water was found to be contaminated with high levels of a compound known as total trihalomethanes, or TTHM, a chlorine byproduct that can be carcinogenic.

Finally, in early 2015, reports began to circulate of high levels of lead in the drinking water, followed by reports of lead poisoning among children. Lead poisoning can have a severe neurological, developmental, and behavioral impact, particularly on children and infants under the age of 6.

The city is still working toward a recovery. In his State of the State Address in January 2016, Gov. Rick Snyder told the people of Flint, “Government failed you at the federal, state and local level. We need to make sure this never happens again in any Michigan city.”

DeRionne P. Pollard, president of Montgomery College, is co-teaching a class this semester on the Flint water crisis with MCC.

Pollard says that community colleges have a crucial role to play in engaging local residents.

“Besides being very definitively American, they are these very tightly coupled institutions with the community they serve,” she says. “If your community is thriving, the college thrives.”

While the water crisis was going on, says Walker-Griffea, the college was monitoring the situation. When reports of TTHM in the water began to circulate, the college took note. The crisis was already impacting students and their families. So by the time Mayor Karen Weaver had declared a state of emergency in Flint in December 2015, MCC was already ahead of the game.

“It’s been a very big issue,” Walker-Griffea says. “There’s been a lot of fear about the water, at home and even on campus, which is why we’ve spent the amount of time, energy, money that we have to ensure that we can know what is in the water.”

Aware of the elevated TTHM levels in the water, MCC began distributing bottled water to students and installed hydration stations throughout the main campus to filter water over Christmas break in 2015. None of this was inexpensive. The hydration stations alone cost $400,000 to install, money that came out of the budget for capital remodeling efforts.

Walker-Griffea says that the money was well spent if it impacts the community positively.

“We’ve always been seen as a safe haven in this community for our students. We wanted to keep that trust that we have built through the years,” she says. “We’ve really stepped forward as a college to ensure that when you’re in our spaces, that we are going to be vigilant to ensure that we provide the best quality of service to our students.”

Today, the water in Flint is safe to drink, provided that residents use filters. Yet a long-term solution is still distant. The city is also working to replace some of the more hazardous pipes but so far has only been able to fix several hundred, while, in the end, thousands of pipes will most likely need to be replaced, at a cost of millions of dollars. When Washington, D.C., went through a similar pipe replacement project, 12,000 pipes were replaced to the tune of $100 million over seven years.

Catherine Morris can be reached at cmorris@diverseeducation.com