The announcement this week by Morehouse College that it was parting ways with its president after four years on the job adds additional grief for the larger community of historically Black colleges and universities (HBCUs) in America, say higher education advocates who have seen a stream of implosions of university leadership teams over the past decade. 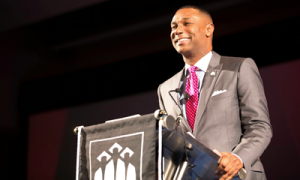 Johnny Taylor is president and CEO of the Thurgood Marshall College Fund.

“The turnover messages to the broader philanthropic community [that] this entire sector [HBCUs] is unstable,” says attorney Johnny Taylor, president and CEO of the Thurgood Marshall College Fund, the Washington-based nonprofit that raises funds to help students pay to attend historically Black colleges.

The stream of presidential departures makes the philanthropic community “question the wisdom of investing” in this group of institutions, says Taylor, who focuses on courting philanthropists into supporting HBCU institutions’ education costs.

The joint announcement was made Monday by the Morehouse College Board of Trustees and university president Dr. John Wilson that his contract would not be renewed when his current agreement ends on June 30. This was also the national holiday celebrating the birthday of Dr. Martin Luther King Jr., the civil rights champion who is the university’s most distinguished graduate.

No reference was made in the announcement to King’s holiday, causing some knowledgeable observers of higher education management to ask about the timing of the announcement of a decision that had been made a few days earlier.

“Something really bad took place that had to be addressed as soon as possible,” speculated Dr. Leonard Haynes, the recently retired U.S. Department of Education veteran official. Haynes has worked with Morehouse and other HBCUs over his two decades in the federal government and at time with Wilson during his brief stint as director of the White House Initiative on Historically Black Colleges.

“They had to stop the bleeding,” said Haynes, hastening to add he was offering his views from a distance, not as someone with real-time direct knowledge of what prompted this week’s announcement.

Wilson, a rookie president who had never headed an institution of Morehouse’s size and standing nor had direct responsibility for as many diverse tasks, had repeatedly been at odds with some members of his board of trustees, said knowledgeable observers who would not speak for attribution.

Some Morehouse backers, thinking of the fundraising success of former University of Miami President Donna Shalala when she came to the university from the Cabinet of then-President Bill Clinton, had assumed Wilson’s ties to the White House would translate to better connections with potential funders. He had not become the rainmaker some backers had hoped, they noted.

Others, aware of doubts about Wilson’s frequently questionable demeanor, thought it would not be an issue when he was university president. Those questioned this week about the Morehouse announcement said, timing aside, Wilson’s departure did not come as a surprise. He was at odds with key members of the university board almost since he started at Morehouse, they said.

News of Wilson’s separation from Morehouse comes as some parts of the higher education community are still trying to sort through the departures within the past year of the new presidents of Florida A&M, Alabama State, Kentucky State and Jackson State universities. Those came amid the implosion of the respective contracts between the boards of trustees and presidents of Chicago State, Fisk and South Carolina State universities. Several of those institutions are among half a dozen searching for new, permanent presidents.

“To lose a leader at this point raises some questions about what does the board want and are there clear distinctions between making policy and playing administrator,” said Haynes, urging onlookers to exercise caution in drawing any sweeping conclusions about the departures. Suggesting “the lines are blurred” too often between rookie presidents and boards of trust, Haynes said, “You can only have one president at a time.”

All of the HBCUs are what the federal government and higher education supporters characterize as “limited resources” institutions, meaning they had limited access to funds and support. At the same time, the institution’s leaders are being called upon by their trustees and, in the case of public institutions, state legislatures, to make near-magical overhauls with dwindling funds and fewer students.

Figuring out the challenges facing these institutions and the best way to wrestle with them “is not as simple as the data suggest,” said Haynes.