Guillermo: How Far are Colleges, Scholars Ready to Go Against Trump? - Higher Education

Guillermo: How Far are Colleges, Scholars Ready to Go Against Trump?

As the legal back and forth on the Trump executive order is creating a public mini-course on constitutional law and presidential power, it’s clear higher ed has an opinion about closing of borders to immigrants from seven majority-Muslim countries.

Last week, President Christopher Eisgruber of  Princeton University delivered a letter to Trump that urged him to “rectify or rescind” the order. 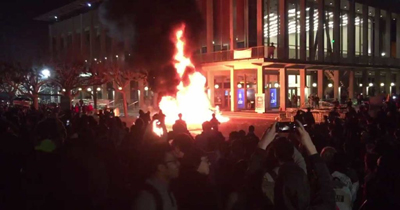 “If left in place the order threatens both American higher education and the defining principles of our country,” said Eisgruber, himself the son of immigrants, in a letter that was signed by 40 other college presidents.

The schools represented were other Ivies such as Harvard and Yale, as well as other private schools, big and small, like Stanford, Emory, Davidson, and Pomona. Public institutions were in the mix too, including the University of California, the University of Maryland at College Park, Rutgers, University at Buffalo and Stony Brook University.

“America’s educational, scientific, economic, and artistic leadership depends upon our continued ability to attract the extraordinary people who for many generations have come to this country in search of freedom and a better life,” Eisgruber wrote.

He doesn’t see all the great talented scholars coming to America. Trump reacted to a federal judge in Seattle halting of the travel ban last Friday by tweeting “many very bad dangerous people may be pouring into our country. A terrible decision.”

But in his letter, Eisgruber anticipated Trump’s reaction by writing: “We recognize and respect the need to protect America’s security. The vetting procedures already in place are rigorous. Improvements to them should be based on evidence, calibrated to real risk, and consistent with constitutional principle.”

Still, in the first few days, we see that reason only goes so far with his administration.

You can read the Eisgruber’s  whole letter here.

More than 27,000 academics from the U.S. and abroad, including 20,000 faculty members called the order discriminatory, “inhumane,” and “un-American.” And they said it would “significantly damage the United States’ reputation for academic excellence in higher education.”

The academics started a petition drive at https://notoimmigrationban.com/

So it’s great to see that free speech has not been trumped in higher ed.

At least not yet.

Because another story that broke last week indicates how Trump can react if he really doesn’t like you.

When the University of California at Berkeley allowed Breitbart News editor Milo Yiannopoulos a platform to speak last week, it was doing so in the spirit of the First Amendment.

Unfortunately, the speech also attracted a group called Black Bloc, a group of non-students who believe in extreme acts of protest. They’ve been implicated in all the acts that got national attention: the smashing windows, destroying public property, and setting off a small fire.

The university was caught in a no-win. Cancel the speech in the name of security, and you are prey to attacks that you trampled on Yiannopoulos’ right to his bigoted and odious beliefs.

Let him speak, and you subject your campus to “outside agitators,” who come in and disrupt your pristine atmosphere of learning.

UC opted for safety, and of course got attacked, unfairly. The criticism came draped with the irony that the “censorship” came at the birthplace of the Free Speech Movement in the ‘60s.

Only it’s an unfair criticism.

And the loudest of the critics?

“If U.C.Berkeley does not allow free speech and practices violence on innocent people with a different point of view—NO FEDERAL FUNDS?”

The problem was Trump got it wrong. Free speech was allowed, or at least protected. Trump also got it wrong as to who the perpetrators of the violence were.

But we’re learning that this is a presidency that places little value on facts.

Still, it’s clear what the president was doing.

He was protecting the free speech right of his aide’s pal, by threatening yours.

Federal funding is nearly as important to private as well as public schools, and to most research that takes place.

Even in a tweet, the threat of cutting off of public funds should have sent a chill throughout higher ed.

Now is the time for some deep soul searching about what higher ed in America stands for.

Or has the ivory tower discovered the limits of its free speech?

Emil Guillermo is a veteran journalist and commentator who writes for the civil rights group, AALDEF, at http://www.aaldef.org/blog