A group of Howard University students is calling on the university to take a stronger stand against President Trump and some of his policies. In a meeting on Wednesday morning, university president Wayne A.I. Frederick countered their demands by raising his own concerns about the ongoing financial stability of the university. The discrepancy between students and the administration speaks to a broader divide in how the HBCU community perceives the Trump presidency.

The student group, calling themselves Concerned Students, 1867 challenged the university administration in a series of rallies and town hall meetings that took place on Monday and Tuesday. They also attempted to present their concerns in person at the Mordecai Johnson administration building. 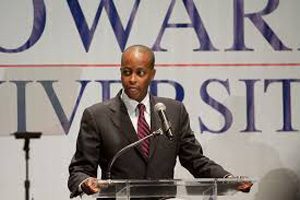 Concerned Students, 1867 refers to the year Howard was founded and also pays tribute to the University of Missouri student group, Concerned Student 1950, that led protests ultimately leading to the resignation of the president of the UM system and the chancellor of the system’s flagship Columbia campus.

In a town hall meeting on Tuesday night, students expressed disappointment that the administration of the nation’s flagship historically Black university had not done more to put itself at the frontline of resistance to the new administration.

Juan Demetrixx, a senior and student organizer, asked students gathered in the Andrew Rankin Memorial Chapel whether they thought Howard was living up to its reputation. “Howard is supposed to be the staple of Black liberation, correct?” he said.

“We’re sold a dream of Howard being a pioneering institution for social justice and Black liberation and Black empowerment and when we get here, the administration and Howard as an institution is almost in opposition to all of those things,” Durmerick Ross, an organizer and Howard freshman, told Diverse on Wednesday.

The student discontent comes in the wake of Betsy DeVos’ first visit as Secretary of Education to Howard last Thursday, where she met with the president and student leaders. DeVos’ visit, touted as a success by Frederick in official statements, was nevertheless met with some skepticism on campus.

“I’d have no problem with our University meeting with #TeamTrump if I thought they’d actually hold them accountable,” Howard University Student Government Association president Allyson Carpenter wrote on Twitter on Friday.

Student organizers from Concerned Students, 1867 created a list of demands on Sunday evening, requesting that Frederick respond to each point by noon on Wednesday.

The full list of demands included the following stipulations:

The administration did not reply with a written response by noon, saying that students would receive a response by 5 p.m. By 5 p.m., organizers said that they still had yet to receive a direct response to their concerns.

Organizers said they were disappointed by the administrative silence. “It means a lot for how seriously he takes not only us as people who are presenting these issues but the issues themselves,” Johnathan Safford, a Howard freshman, told Diverse. Ross noted that the administration did not appear to be prioritizing communication with students but instead with media outlets.

In the Wednesday morning meeting with activists, Frederick balked at many of the demands, saying that he wanted to clarify several points before making an official statement. Students recorded the meeting live on Periscope, despite objections from the administration.

Frederick stressed Howard’s unique position in the higher education sector and its dependency on federal dollars. Other than military institutions, Howard and Gallaudet University are the only two institutions that are federally chartered. In addition, Howard derives a significant amount of its funding from the federal government. Frederick said that when all revenue streams are taken into account, approximately 88 percent of Howard revenue could be traced back to the federal government.

Howard’s financially troubled hospital accepts Medicare and Medicaid funding; 60 percent of students receive Pell Grants, which is a federally funded program; and the university receives a special federal appropriation through the Department of Education. Howard received $221 million for 2017 through that appropriation, which Frederick said accounted for for 38 percent of its operating budget.

With the charter and federal funding come certain stipulations that the university must abide by, Frederick told students. For instance, as secretary of education, DeVos is an ex-officio member of the Howard Board of Trustees.

The entanglements that come along with financial dependency are less than ideal, Frederick acknowledged. “I would like us not to be dependent on the federal government, period,” Frederick told students at the Wednesday morning meeting. Yet he also stressed that, without federal funding, Howard would have few options.

Tuition and alumni giving, at their current rate, would not cover expenses, Frederick said. He pointed to the financial needs of its students, saying that the university had to increase the levels of annual institutional aid to students from $42 million to its current $110 million after the Parent PLUS student loan program was revised under the Obama administration. Even with the jump in institutional aid, students are still falling short on their tuition bills. Howard is currently $30 million short on tuition it is owed.

Frederick said that it was an institutional goal to help more students afford for their education and to that end had requested an increase in the federal appropriation. To cover student needs, he said, the endowment would have to be $5 billion, as opposed to its current $660 million.

“I feel that the meeting was effective only in the sense of putting a face on certain things,” Safford said. “I think it was good to get the clarity of the points across to him. However, personally I do feel that with a lot of the things we were addressing, he found a way to cleverly take a stance, yet not say definitively what that stance might be and what that stance might entail.”

In the meeting, student organizers stressed that they were not requesting that Howard divest itself of all federal funding. Instead, they were looking for an assurance that Howard would not accept any additional funding from the Trump administration.

The administration is reportedly constructing an executive order on HBCUs, which leaders in the HBCU community hope would have two key provisions. First, they want to see the White House Initiative on HBCUs moved from the Department of Education to the White House. Secondly, they hope that the administration will award HBCUs 5 percent of the total federal grant, internship and cooperative agreement funding, and 10 percent of total federal contract funding awarded to colleges and universities. According to the United Negro College Fund (UNCF), which advocated for its 35 HBCU member institutions, this would nearly double federal support to HBCUs.

In a statement released to Diverse on Wednesday night, UNCF said that as an organization, they are “ready to work with the Trump-Pence administration on these critical challenges this year and in the years ahead.”

Johnny C. Taylor, president and CEO of the Thurgood Marshall College Fund (TMCF), a Washington, D.C.-based organization that advocates for 47 or the nation’s 105 HBCUs, said that he is “cautiously optimistic” about the future of HBCUs under a Trump administration. Howard is a TMCF-member institution.

“We were less than pleased with how things worked with the former administration with respect to HBCUs, everything from the loss of critical Pell dollars, to Parent PLUS loans, to the lack of federal spending with HBCUs,” Taylor said. “Those were frankly downers for our community.”

Taylor said that the Trump team reached out to TMCF as early as June 2016, when they were still in the middle of running a presidential campaign, with the express interest of learning more about HBCUs. “They understood that the HBCU largely had created the Black middle class in times past,” he said. The Trump team continued the dialogue after winning the election, and recently sought out TMCF’s input on an executive order on HBCUs.

“All of this portends some good days ahead. It remains to be seen how it all plays out, but I at least, and I think many of us are cautiously optimistic that this could actually be good for us, and clearly better than it’s been,” Taylor said. “Frankly, just having the conversation is better than it’s been.”

Joe Cohn, legislative and policy director of the Foundation for Individual Rights in Education (FIRE), said that there is precedent in which a private institution had disinvited a speaker from visiting campus. The president of Williams College, for instance, took the unusual step of canceling the appearance of John Derbyshire last year after he had been invited to speak by a student group called “Uncomfortable Learning.” Derbyshire is known for his controversial writings on race, for which he was fired from the National Review.

Such instances aside, Cohn noted that private institutions that promise free speech to students and faculty members may be bound by contract law to uphold such promises. If an administration were to disinvite speakers or visitors to campus who were invited by community members, that step could be construed as a violation of free speech, he said.

“It’s a little bit of a shame that students are demanding that [Trump] not receive a platform because it would probably be the best opportunity they’re likely to have to challenge a sitting president if he were to come on campus to face their criticism,” Cohn said.