In a move that has been generating some buzz and attention in recent weeks, the White House is said to be preparing an executive order on historically Black colleges and universities (HBCU). While there has been no official word from the White House on when the order might be released and what policy directives it might contain, organizations that advocate for HBCUs in Washington, D.C., have laid out their own proposals for what the order could accomplish.

Johnny C. Taylor, president of the Thurgood Marshall College Fund (TMCF), is confident that the order will be released soon, although he did not have specifics on an exact date.

HBCU leaders are planning a meeting at the White House on February 27, he said. 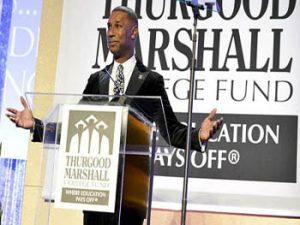 Taylor said he wanted to see the order establish the White House Initiative on HBCUs in the White House, as opposed to the U.S. Department of Education, where it is currently housed.

The move would help put the weight of the executive branch behind HBCUs, he said.

“There’s no replacement for having the White House and the president stand behind something,” he added. In addition, Taylor said that the order could contain an “aspirational goal” that would increase grant and contract funding to HBCUs.

The United Negro College Fund (UNCF) released two statements on its priorities regarding the order on Wednesday and Thursday night. TMCF and UNCF are nonprofit organizations in Washington that share the common goal of advocating for their respective HBCU-member institutions. A UNCF representative said that UNCF policy experts were not available to elaborate further on the specifics of the statement on Friday.

According to both UNCF and TMCF, the two groups are in alignment about their goals for the order, along with the National Association for Equal Opportunity in Higher Education, an HBCU umbrella organization that is also based in Washington. Taylor said that there has been communication with White House communications officials, including Omarosa Manigault, and domestic policy advisers regarding the order.

Talks with the Trump team about HBCUs reportedly began during the presidential campaign.

In statements released to Diverse, UNCF affirmed its commitment to nonpartisan efforts to advance the agenda of HBCUs, and laid out three key policy recommendations. In accordance with TMCF’s goals, UNCF recommended that the order “establish the White House Initiative on HBCUs in the White House.”

In addition, UNCF recommends that the initiative be led “by an executive director who reports to a senior adviser to the president.”

The organization also recommends that White House “commit to an aspirational goal” awarding HBCUs “5 percent of total federal grant, internship and cooperative agreement funding; and 10 percent of total federal contract funding awarded to colleges and universities.” Lastly, UNCF recommends that the order “require transparent and timely reporting on progress to the president, Congress and HBCUs.”

Taylor said that, for the order to succeed, the language would have to be crafted carefully. He pointed to the confusion that ensued after Trump signed an executive order on immigration, which resulted in multiple lawsuits and court orders blocking its implementation.

“There are people who wrongly believe that HBCUs are race-based institutions, that they somehow only are for Black people and others are excluded,” Taylor said. “So, if we roll out an executive order that says or proposes to do things that violate the Constitution, then we run the risk of someone challenging the order, just as they did with the immigration ban. So we need the president to do this right.”

He said that the administration was approaching the issue with all due caution. “If we push too hard and we get things in the order that make us feel good that are then subject to judicial challenge, then we could win the battle but lose the war,” he continued. “So I’m actually pleased that the administration is being very thoughtful and very intentional.”

Dr. Marybeth Gasman, a professor of higher education at the University of Pennsylvania Graduate School of Education and director of the Penn Center for Minor Serving Institutions, raised concerns about moving the White House Initiative on HBCUs to a Trump White House.

“If the Initiative had been moved under President Obama, I may have felt that HBCUs would have been elevated, but I worry moving it now will endanger HBCUs,” she wrote in an email. “Trump and his underlings have no knowledge of African American communities, institutions, and zero respect as well. I am deeply troubled by any relationship with Trump.”

Trump came under fire for numerous comments on the campaign trail that described urban, Black communities as centers of chaos and crime. He has also been criticized for selecting Steve Bannon as a chief strategist and senior counselor. Bannon was the chairman of Breitbart News from 2012 to 2016, a conservative website that Bannon called the “platform of the alt-right” in an interview in July 2016. The alt-right is a movement centered around White nationalism.

The White House Initiative on HBCUs was initially established by President Carter in 1980 as a federal program to strengthen HBCUs. Since then, it has been routinely renewed by executive order by each president. Currently, the initiative does not have an executive director in place. Its most recent acting director, Dr. Kim Hunter Reed, took on the role in July 2016 after the initiative’s last permanent director, Dr. Ivory Toldson, relinquished the post.