As many of you have heard, and seen on social media, I along with other HBCU presidents and chancellors were invited to the White House for a meeting with President Trump and several members of Congress. 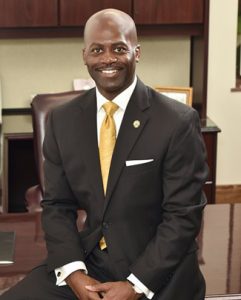 Initially, getting a call to come to the White House and meet face-to-face with the President of the United State would usually be met with great excitement. While it is always an honor to meet the leader of the free world, I must admit I had reservations. My reservations drove me to make a list of pros and cons and in the end my decision to attend was based on several factors.

First, I saw this as an opportunity to have West Virginia State University be a part of a larger discussion that puts forth an agenda that would benefit our universities and our students. Also, I wanted to ensure WVSU would be a part of outlining the pathway forward for HBCUs and how we are funded in the future.

While it was good to be back in my hometown, the series of meeting did not go as planned; however, I applaud the efforts of Johnny Taylor, CEO of the Thurgood Marshall College Fund, and his team for putting together a well-organized event. I also appreciate Sen. Tim Scott and Congressman Mark Walker for their leadership and willingness to take on this profound issue.

Our time with the President was cut short by photo ops and handshakes. Nevertheless, I wanted to leave Washington making sure the President and law-makers understood the value and importance of HBCUs. And our value to the success of this country is undeniable

First, let me be clear there would not be an African American middle-class in this country if not for HBCUs. Forty percent of US legislators earned their college degree at an HBCU. HBCUs still produce more African American STEM majors than our PWI peers, and we have a proven track record of taking more students who are academically ill prepared and turning them into scholars that positively change our nation.

I wanted the President and Congress to understand the importance of enhancing funding to HBCUs. We asked them to reinstate year-round Pell Grants, to set aside a percentage of federal grants for HBCUs, invest in teacher education, and fully fund Title III. And while House Speaker Paul Ryan indicated he felt these are reasonable and doable request, time will tell. Until such time, we (HBCU Presidents) we will continue to challenge those in Washington at every turn.

These are the reasons I decided to go to Washington. And I am glad I did.

Ramapo College President to Step Down