The teacher prep regulations that the Obama administration pushed for years to establish in order to hold schools of education more accountable for the K-12 teachers they produce are now one presidential pen stroke away from becoming history. 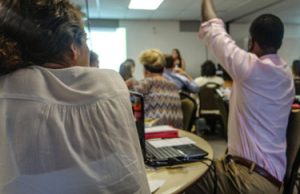 The organization that represents educator preparation programs could not be more delighted with the U.S. Senate’s vote Wednesday to rescind the regulations through a joint resolution, but a different group that argued the regulations brought some much-needed transparency to teacher prep programs is dismayed to see them go.

Kate Walsh, president of the National Council on Teacher Quality, which supported the regulations, said that, by overturning the regulations, Congress is signaling to America’s teacher preparation programs “that they will not be held accountable for how well they educate aspiring teachers.”

“Nor will applicants be able to discover which programs provide the best preparation for teaching,” Walsh said. “This measure also robs education leaders of the necessary information to laud exemplary programs and intervene to help struggling programs succeed.”

However, the American Association of Colleges for Teacher Education praised Congress for scrapping the regulations.

“With the elimination of these onerous regulations, states and the profession will be able to continue directing time, energy and resources to supporting innovation, as well as strengthening programs to ensure that teacher candidates are profession-ready and able to meet the needs of our nation’s students,” AACTE said in a statement provided by Deborah Koolbeck, director of government relations for AACTE.

The regulations — if they had survived — would have required states that receive funds under the Higher Education Act to create a rating system for their teacher preparation programs, which would be rated at one of four levels: low performing, at risk, effective or exceptional. Programs would have been judged in part based on learning outcomes for K-12 students taught by their graduates.

Only programs with high ratings would have been eligible to participate in the federal student financial aid program called TEACH grants.

AACTE had argued that federal aid should not be tied to rating systems that were unknown quantities at the time. The organization also argued that the regulations would have “disadvantaged programs serving the communities that most need well-prepared teachers, such as those with low-income and high-minority populations and students with disabilities.”

AACTE also argued that the regulations would likewise “impede progress toward increasing the diversity of the teaching profession — a serious challenge throughout our nation — as many teachers of color are recruited from and seek to teach in high-need schools.”

NCTQ, on the other hand, argued that the regulations brought some much-needed transparency to the world of teacher prep. Walsh said she is hopeful that the “transparency requirements embedded in the teacher preparation regulations, including reporting key data at the program level and conducting statewide surveys of new teachers and their principals” will be included in the reauthorization of the Higher Education Act, or HEA.

“Our nation’s students and schools deserve nothing less,” Walsh said.

Benjamin Riley, executive director and founder of Deans for Impact, said the rescinding of the regulations at the federal level is not a major blow to efforts to hold teacher prep programs more accountable.

The joint resolution to kill the teacher prep regulations is headed to President Donald J. Trump for his approval.

“The sky did not fall when the regulations were implemented, nor will it now that they’ve been rescinded,” Riley said. “States are moving ahead and wagon-circling won’t work to stop them.”

Asked to clarify what he meant by “states are moving ahead,” Riley said: “Moving ahead to identify what impact educator preparation programs are delivering, and holding them responsible for their impact.”