It is that time of year: it is either time to teach, sell or consume Cinco de Mayo.

If one decides to teach it, then people come to learn of a great anti-imperialist struggle (1861-67) fought by poor peoples, and a day that memorializes a heroic battle in Puebla on May 5, 1862, that eventually culminated with the kicking out of the French from Mexico in 1867. 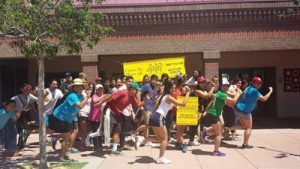 If one decides to sell it or consume it, then one becomes part of that capitalistic practice of debasing anything sacred and turning it into a tragicomic holiday where drinking and white sales become the norm.

It is a time when the media will go to the local bar and then ask drunk gringos — and nowadays even drunk Mexicans — the meaning of Cinco de Mayo and the response is usually: “It’s Mexican Independence Day” or “who cares … it’s just a time to party.”

It is tragic that that is the choice one has to make every year. These are the same battles that take place off and on college campuses or the local bars or supermarkets or liquor stores every year. It is a time when we are bombarded by messages to drink and party and wear big sombreros and put on mustaches and throw out wimpy shrieks that attempt to pass for genuine celebratory gritos.

Yes, much of this is fueled by the liquor and alcohol industries, and the promotion of such nonsense is to be expected. To see people engage in such behavior is beyond ridiculous. What is unexpected is when Mexican people themselves begin to emulate the advertisement. It is when the people themselves begin to live those stereotypes, seemingly unaware that they are in fact living those stereotypes.

This year, the same dilemma will exist come Cinco de Mayo. So many of us wonder if there is an entity as powerful as the liquor and alcohol industry to counter this debasement? We already know the role of the media in this defilement. But what about our nation’s educational system? Is it up to the task?

Traditionally, the educational system has not been much better. Of course, if it is simply about teaching Cinco de Mayo accurately, then it can be done, as was done on college campuses in the 1970s. There are plenty of resources and one that I can recommend is the work by David Hayes-Bautista that teaches everything about it, especially its importance to the United States: El Cinco de Mayo (UC Press, 2012).

The truth is, the worst offenders and the worst offenses on this topic occur on college campuses. So should we keep blaming the K-12 system or perhaps should we also examine what is being taught at the college and university levels?

What it really shows is the need for the teaching of ethnic studies at both the K-12 and college and university levels nationwide. So yes, Cinco de Mayo should not simply be celebrated, but also taught properly. But the larger message is that this is true of all peoples, because we continue to see in the media, the debasement of all the different peoples and cultures, of all races and genders, that live in this country.

And of course, we continue to see a rise in both intolerance and hate crimes nationwide. This cannot be divorced from what is happening at the very top when you have an administration that rose to power on the basis of demeaning every sector of society that isn’t part of the White ruling class.

But let’s get back to Cinco de Mayo. At least some of us celebrate it differently. At the University of Arizona, my students have been celebrating a Cinco de Mayo Sobriety Run/Walk four years in a row, plus a Healthy Food Festival nine years in a row. We do this because alcoholism is absolutely a problem within our community. So, too, are obesity, heart disease and diabetes.

Yes, we teach about Cinco de Mayo and its great symbolic victory, but we are also concerned with addressing these major issues facing our communities today.